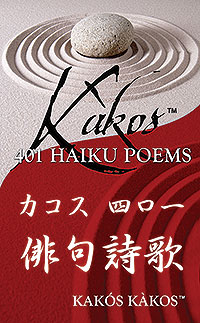 In the annals of mankind, philosophers have offered wisdom about the purpose of life and man’s place in the universe, whereas poets explore the nuances of life itself. The role of the poet is to illuminate experience. The poet sings of his love for freedom, and in turn, he is indebted to the soldier, who is the protector of freedom. Kàkos left Greece, his homeland, where philosophy and poetry have thrived for 4000 years to come to the new world of America, where he served as a soldier, and was blessed by all three of the special attributes of poetry. Kàkos’ bloodline of Greek wisdom and lyricism became infused with the tradition of haiku, a poetic form that originated in China prior to the age of Confucius, and eventually arrived in Japan. The Japanese poets loved haiku poetry, and had the honor of bringing this literary form to a higher level, circa the 11th century. Haiku did not arrive in Europe until the 1830s, and it came to America in the 1880s. The elegant attenuation of haiku deeply inspired Kàkos, who found it reminiscent of the Greek saying that “a thought-provoking poem is worth more than a thousand pictures.” Kàkos’ 401 Haiku Poems brings the ancient traditions of Greece and Japan together to create a unique aesthetic, emotional, and spiritual experience.

Chris George Demopoulos, who writes under the pen name Kakós Kàkos, is a longstanding and proud resident of Southern California. A pioneer in the computer industry in the 1960s, Demopoulos later became an entrepreneur, chess player, writer, poet, and philanthropist. He is married, with three children, and is currently working on his next book. 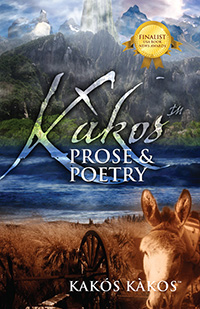 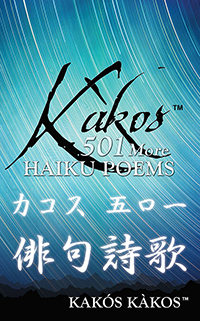