Neomechanics of the Hierarchically Infinite Universe 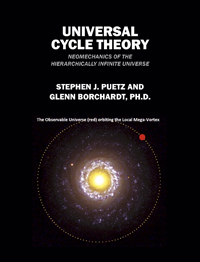 Neomechanics of the Hierarchically Infinite Universe

The universe is infinite; the motions of matter are predominantly cyclical.

These simple statements hold huge implications about how the universe must operate if it was truly infinite rather than finite, as is commonly thought. In one sense, this book, Universal Cycle Theory, may seem radical because it postulates that the universe operates in ways that are dramatically different from what we are taught. Yet, this new theory is conventional in the sense that it closely conforms to virtually all existing laws, equations, and observations. There are only two elements that make the Universal Cycle Theory radical — cycles and infinity. Other than that, much of what you read in this book will seem familiar and conventional. Cycles are crucial because they are reflections of how matter behaves in an infinite universe: as vortices and waves. A vortex forms when matter rotates, producing circular cycles. A wave forms when colliding matter compresses and decompresses, producing linear cycles. Infinity is crucial because it explains the extent and structure of the universe. We assume that matter is infinitely divisible in the microscopic direction and infinitely integrable in the macroscopic direction. We assume that time was infinite in the past and will be infinite in the future. This concept of infinity is unique, having never been employed in a model of the universe before. It resolves many of the paradoxes and contradictions currently riddling physics and cosmology.

Steve Puetz, a mathematician and statistician, wrote The Unified Cycle Theory (2009), a landmark book announcing the discovery of a seemingly infinite set of cycles, now dubbed the UWS cycles. This was just enough evidence for the two authors to begin the great collaborative effort that resulted in this book. Steve provided the research and developed most of the ideas for the book. Glenn Borchardt, a scientific philosopher, initially developed the infinite universe theory - detailing its foundation in The Ten Assumptions of Science in 2004. In The Scientific Worldview (2007), Borchardt introduced the universal mechanism of evolution and neomechanics, which adapts classical mechanics to infinity. Glenn provided the philosophical and editorial guidance for the book. 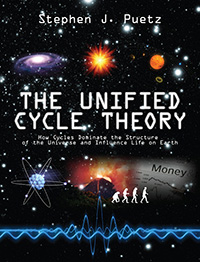