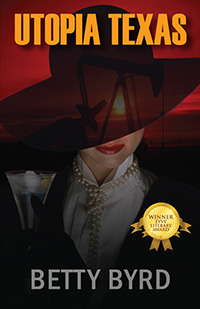 Are wealth and status worth the price-when that price is your own daughter?

Author Betty Byrd has seen it all-including drilling her very own oil well! She now brings her unique vision and experience to Utopia Texas, a riveting tale of Brya Harrison, a woman created by chance and circumstance. Part gambler, part geologist, Brya knows that in the West Texas oil country upbringing may not matter, but status is everything. She has worked hard to secure her position, but she finds her plans unravel when she discovers that her daughter, Olivia, is somehow "different," and is forced to face the unfathomable-one startling revelation at a time. Drawn into a maelstrom of events fueled by her daughter's indiscretions, Brya sets out to cover each one up-whatever the cost. But will she be able to combat the demons plaguing her daughter as skillfully as she is able to face down her competition in the cutthroat world of big oil?

In this stunning followup to the author's debut novel, Trinity's Daughter, Betty Byrd has woven a brilliant tale of wealth, greed, love, and the pursuit of power-and how one particular woman holds her own in the male-dominated oil business.

"Both a rich portrait of mid-century oil speculation and a classic tale of mother-daughter conflict, Utopia Texas is no paradise, but it's a satisfying - and sometimes frightening - trip through purgatory.
At the heart of the novel is Brya Harrison, a rich Texan woman trying her hand at petroleum exploration. The search for crude in West Texas is a man's game-at least mid-century, when the novel is set. But Brya, a tough dame with whom Byrd obviously sympathizes, throws herself into this new enterprise with hurricane force, buying up properties, as her husband says, "from here to Timbuktu." Brya, whose past is a tortured patchwork of pain and loss, is recently remarried to Cole, Utopia's most provocative character. Cole is a Jack Daniels-swilling, lecherous Texan who, despite his flaws, boasts a generous streak and a warm spot in his heart for his stepdaughter, Olivia. Though Olivia is Brya's daughter the two are polar opposites. An eccentric soul, the tall, gangly girl has few friends and can bearly hear out of one ear. She also has a strange-one might call it Carrie-esque-tendency to court danger. For reasons that only eventually become starkly clear, mysterious accidents happen when Olivia is around - near-drownings, broken bones, deep cuts-and the hard-charging Brya is repeatedly challenged to cover up her daughter's "mishaps" as she tries to maintain her social standing and make her way as a big oil speculator.
As Byrd is well aware, thick, black oil is both the dark blood that gives her novel's world life and the pitchy trap that snares the unwary in greed and vice. Oil, in other words, yields both promise and peril, and the author is adept at mining the different meanings of her novel's central symbol. She is squally capable when it comes to balancing her two complex heroines. Though their destinies are intimately related, Brya and Olivia need to cut distinct paths through Utopia, and Byrd gives each such strength and definition that their inevitable clashes-and there are many-burn with the energy of an oil fire.
A thrilling tour de force." Kirkus Discoveries, (New York, NY)

"According to Ernest Hemingway, 'A writer's style should be direct and personal, his imagery rich and earth, and his words simple and vigorous.'

Betty Byrd has accomplished this and more in her intriguing follow-up to "Trinity's Daughter." Every family has dark secrets and colorful characters that spice up any gathering of clan, and can either rub you the wrong way or be a breath of fresh air. Some family members, however, can literally suck the oxygen out of a room faster than a wildcatter's worst nightmare.

Utopia Texas is a great summer read that explodes from page one with a hellish oil well blowout in Venezuela that grabs our attention and, like hot fingers of fire clenched around our throats, squeezes every last drop of drama out of one family's journey along the teetering edge of madness and how it threatens to pull them all into the abyss.

Now, toss an innocent child into the mix and stir, vigorously. When oil deals and society trump true love, and when anyone threatens the family - whether from without or within - the depth and length to which Brya Harrison goes, to hold this dysfunctional family together, will keep you turning the page.

That today's very real oil crisis looms over all mankind, affecting the lifestyles of everyone from kings and queens to the little pawns, is perfectly poignant and cause for much introspection. "Utopia Texas" will make you stop and think about how far you'd go for wealth, power and prestige, and Betty will make you cry at the price an innocent girl must pay for all the trappings of high society." H. Scott Hackney (West Coast)


"Big oil, big land, and larger-than-life characters all spell Texas. UTOPIA TEXAS is Texana at its most raw. And in the end, its most redemptive." -Susan Mary Malone, author, By the Book

"Betty Byrd has created a story that is as intense as an oil well fire-volatile and explosive. Utopia Texas will make you feel as if you lived it, while being forever thankful you didn't." - J.D. Smith, host of Pursuing the Blues, KCLAFM.com, Los Angeles, California

"The oil field has its share of personalities that are larger than life. Fueled by strong wills and old-fashioned guts in order to face the unthinkable, Byrd's Utopia Texas is compulsively readable." - Bill Bledsoe, Petroleum Engineer, Fort Worth, Texas

The escaping gas screamed into the night, sucking the air from their lungs. On the platform, a tool dropped hitting a faulty valve, sparks flew. The oil well erupted into a vision of Hell. An enormous fire-breathing monster spewed geysers of flames greasy with oil fumes. The charred breath of the demon belched thick clouds of black smoke into the air. 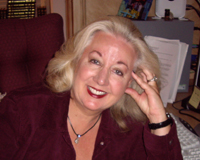 Betty Byrd is one cat that has truly lived nine lives. The first life was that of a jock, where Betty found herself excelling as a competitive swimmer, field hockey player and cheerleader. Through college, she began to realize that her creativity was too strong to ignore. After graduating from the University of Arizona with a Creative Writing degree, Betty packed up her cowgirl life and headed to Ohio to pursue graduate work at Ohio State University. She put her degree to use quickly when she landed jobs as an editor for The Spectator, Ohio’s largest weekly newspaper, and freelancing for a national men’s magazine. After having some success as a writer, Betty yearned for another creative outlet, that of a performing artist. Blonde locks in tow, she left her mid-west roots for Southern California. Hollywood took a liking to the spunky blonde actress who’s resume includes a role on the television series Gunsmoke, as well as featured roles in numerous films, mini-series, and commercials. Betty took a bow as the curtain closed on her acting career when she decided to take on the hardest challenge yet, that of a mom. Once her daughter was in high school, Betty once again felt that creative itch. This time she picked up a pen and returned to writing. Her first novel titled, Trinity’s Daughter, was well-received as she traveled throughout America on a book tour and was honored back at home in San Diego. She is also a recipient of a first place award for her new novel, Utopia, Texas at the prestigious Santa Barbara Writer’s Conference. She is still featured in newspapers, television and radio talk shows, although now as an established author.

Betty Byrd contently lives in San Diego with her husband and German Shepherd, constantly creating and never letting the pen leave the page.

To learn more about Betty Byrd and her upcoming projects and events, visit her on the Web at bettybyrd.com