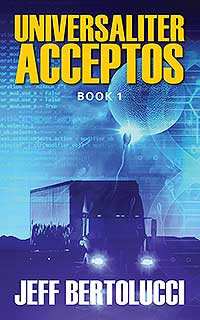 One In A Billion

McCracken, a former Army Ranger, is haunted by a personal tragedy from his past—one that destroyed both his marriage and family. His grief leads him to a shadowy organization fronted by a charismatic university professor and a brilliant geneticist, both of whom convince him to participate in a bizarre effort to save humanity from an untimely demise. A cynical computer hacker and a disgruntled truck driver join the cause, neither of whom is fully aware of the program’s true goal. When McCracken falls in love with a woman hired to be his girlfriend, events unfold that threaten not only the lives of everyone involved, but also the very fabric of human civilization. Darkly humorous and often disturbing, Universaliter Acceptos is a dystopian thrill ride.

Jeff Bertolucci is an award-winning technology writer and journalist who has published hundreds of articles in top print and online publications. Universaliter Acceptos is his first novel. He lives in Los Angeles.