Discussing the condition of American Society as viewed by an ordinary American Citizen and United States Military Veteran! 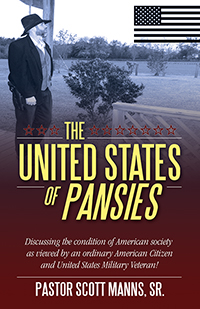 Discussing the condition of American Society as viewed by an ordinary American Citizen and United States Military Veteran!

“The United States of Pansies,” displays an ordinary citizen’s perspective into the decay of America; morally, spiritually, economically, and militarily. The author, Scott Manns, Sr, is a Christian Minister, U.S. Army Veteran, and an ordinary average American citizen. “Pansies,” is inspired out of the frustrations that many Americans are feeling in the direction in which the country is headed and their disappointment in the governmental process in general. Pastor Scott puts it this way, “I have earned my right as an American citizen to stand up for what I believe in and to tell others exactly what I feel.” This book takes a direct and candid look at the sad state of affairs in America and the so-called “political correctness,” that has weakened this great country and turned it into a nation of “Pansies!”

Pastor Scott Manns, Sr. is a native of Hampton, VA. He holds a Bachelor’s Degree in Ministry from Andersonville Theological Seminary, Camilla, GA, and a Masters of Arts in Christian Leadership from Liberty Baptist Theological Seminary, Lynchburg, VA. He has served in various ministry positions for over 10 years. He is married to his loving wife, Marcia, and together they have 6 children. Pastor Scott and his family currently reside, and now call home, Thomasville, AL.