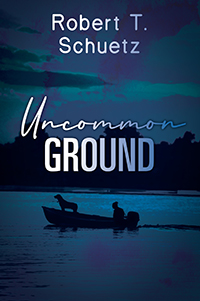 "SAVE THE LAKE!" That was the battle cry of Sommers and his unusual group of friends as they struggled to preserve the natural beauty and retain the quiet comforts of life on Lake Victoria. But, with time running out, would they be able to overcome crooked cops, greedy lawyers, and violent gangsters? Dale Sommers came pre-programmed, raised to be a defender. Lake Victoria was like no other place on earth; he believed it was his duty to protect her. The only place he'd ever called home, Sommers promised to safeguard the lake at all costs. A solitary mountain of a man with a mysterious past, it would take Dale's supreme strength to repel unscrupulous invaders and conquer his unforgiving inner demons.

Claimed in the late 1800s by homesteaders for less than the price of a caffe latte, the coveted waterfront property accounted for three-quarters of Lake Victoria's pristine shoreline, eight hundred acres passed down through four generations. With a current valuation of more than one hundred million dollars, the stakes had become so high; no one close to Sommers appeared to be safe from injury or even death. A power-hungry U. S. Senator, backed by a corrupt sheriff, a team of shady lawyers, and a Native American crime syndicate, set her sights on snatching this crystal-clear sapphire in the rough, and no price would be too high. But ultimately, it would take a monumental team effort led by Sommers, an elderly squatter named Grumpy, and his loyal dog, Phelps, to save the day, and save the lake.

Dale adjusted his ball cap and cleared his throat, “It looks like I owe you an apology. You had your reasons for hiding your identity. I can’t say I agree with all of them, but nobody wants to see you hauled away to a prison in Nevada. No one ever told me about your western adventures and your brush with the law.” The two men stood in silence, gazing out across the water, a verbal game of chess playing out. Finally, after several minutes, Dale said, “C’mon, let’s pack the stuff away and get some sleep. We’ll figure out the rest of it tomorrow.” As the two turned to walk off the dock, Dale moved his queen and said, “You were pretty harsh with your comments about Maggie. I can’t let you off the hook for that.” Dale paused for a moment, then asked, “Where’s Johnny DeMonte?” Checkmate, Grumpy stopped dead in his tracks, looking into Dale’s eyes for a long moment, then he stared back out at the lake. Dale had heard rumors about his wife’s infidelity, but he refused to accept them even after all these years.

Grumpy’s face was too transparent, he wasn’t a very good card player, and he wasn’t a convincing liar. So, he asked, “Who?”

“The missing postman. What do you know about him? Where do you think he went?”

“As I said before, some mysteries are better off left unsolved.” Grumpy continued to shuffle back to his yard.

Dale chased after him and pointed to the short stack of newspaper articles on the picnic table. “All of the papers in this stack are about Johnny DeMonte. I want to know why they are in your folder. I also want to know why you said those terrible things about Maggie. Believe me, whatever you’ve got to say, not knowing feels a heck of a lot worse than hearing the truth.” Grumpy looked down at Joy. She shrugged her shoulders, and the worried old man wasn’t sure what to do.

Again, Dale tugged at his hat, “Have a seat, Grumps. I can see both of you are keeping something from me. These articles say Johnny went missing the same week Maggie died. What’s the connection? Why did my mom save these stories? It’s time for both of you to stop trying to protect me and clear the air.”

Grumpy tossed a few pieces of kindling and a small log on the fire. Then, as embers swirled skyward, he sat down at the end of the table nearest Joy. Phelps curled up at his feet. “I think, deep down, you know what the connection is. Your curiosity is what worried me most when I found the safe. Gracie shouldn’t have saved these fuckin' papers. They’re coming back to haunt us. They are certainly going to end up hurting you and probably end up hurting all of us.” Dale and Joy looked at each other, uncertain about where this was going. “Whatever we discuss around this table stays at this table. Can we agree on that? If I tell you what I know, can we also agree to burn these stories and put this shit to rest, once and for all?” Dale hesitated but finally conceded.

As a teen growing up in suburban Chicago, writing was the farthest thing from my mind. Music, sports, and cars filled my time away from the classroom. Now, having been a professional educator for more than three decades, I’ve witnessed the impact stories have on learning and socialization. Throughout humanity’s checkered existence, the perpetuation of culture and the context of our being has advanced through the art of storytelling. Yet, it wasn’t until my middle years that my father helped awaken my mind to the written word’s melodic rhythms and emotional richness. So, a zig here and a zag there have put me on the doorstep of life’s subsequent chapter. Partially a social obligation and partially a therapeutic outlet, it’s time for me to write the stories that have been ricocheting around in my head, apparently subconsciously, for quite some time. Here's one of my stories--happy reading!