by F. A. Rodriguez 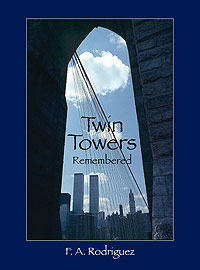 by F. A. Rodriguez

A visual essay about the Twin Towers, starting in the early 1970s to the year 2000. Photographs of the Twin Towers from different angles and lighting conditions as well as years. On the 10th Anniversary of the attacks on September 11, 2001 we remember the World Trade Center. This book is dedicated to all the victims and their families.

F. A. Rodriguez was born in Santiago, Dominican Republic, in 1945. At age four his parents moved to Santo Domingo where he was raised. In 1964 he emigrated to New York City and was a resident of Greenwich Village for many years. In 1968 he married Angeline Marie Dulik. They have a daughter Maya J. Rodriguez, born in 1978 in New York City. In the year 1969 the newlyweds traveled in Europe for a period of nine months. In 1989 the artist and his family moved to South Miami, Florida where they are residents. F. A. Rodriguez holds a Bachelor of Fine Art in Art and an Associate in Art Degrees. His previous publications are: 1989: Museum of the Dominican Man – General Catalog; 2001: The Cosmic Ballet: Ink Drawings; 2002: The Hose Veeris Project: Selected Poems 1965-2001; 2011: My New York: A Visual Memoir; 1971–2011: Oil Paintings, Drawings, Watercolors. His art has been exhibited in Museums and Art Galleries. His art can be view at: www.doublearfineart.net