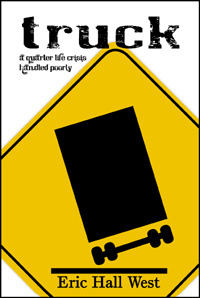 An occasionally terrifying, often uproarious and enlightening odyssey (too) deep into an American life that is everywhere—and nowhere—at the same time.

A naïve, but proud Gen-Xer, Eric West hadn’t the vaguest idea how to drive a manual transmission when he decided the time was right to leave the desk job behind to become a truck driver. Driving 18 wheels, harder than he could have anticipated, was a cakewalk compared to the fish-out-of-water challenges of life lived atop those same 18 wheels. Join Eric behind the wheel of his rig where he navigates – and survives – one of America’s deadliest careers while encountering a cast of unforgettable characters and experiences. At turns heartwarming and life affirming, uproariously funny and adrenalin-pumping — TRUCK is impossible to put down; an irreverent, insightful and image-shattering page turner that will make you think twice before cutting off that big rig.

Despite my crack-of-dawn malaise, I was keen enough to remember to dress down for the first day of class. I regrettably threw out my Nirvana T-shirts, Copenhagen Snuff painter’s cap and stained Levis when my parents transformed my vacant bedroom into a vacant bedroom. So I drudged through my house in a harried, pre-dawn tirade to find a suitably holey, stained T-shirt and worn-out jeans. I had no problem convincing my new classmates I wasn’t some pretty boy. I may have convinced them that I was homeless.

I saw the sunrise that first morning. Unlike the last few I had seen, I had actually slept before laying eyes on the one that marked my first day of trucking school.

Ever the eager student, I was the last of six to take my seat in Ms. Pearl Strong's class, half-awake, at 6:58.

I walked in to see a sparkling, virtually untouched whiteboard, eight tables that would serve as our desks, a wall full of un-shaded windows and a ceiling that was more fluorescent lights than tiles. They were all lit and high-noon bright after walking in from a dusky dawn.

I got settled and looked up to see Pearl chatting with two middle aged guys who looked like they got lost en route to a sunrise tee time. She looked at her watch, then up at me—a not so subtle reminder that I was barely on time—then told us to introduce ourselves. We were asked to include where we were from, what we had been doing for work, why we wanted to be a trucker and what kind of trucker we hoped to be—I resisted to the urge to say "an unlikely one."

The guys who had been talking to Pearl started. More accurately, the bigger of the two explained that he was Tunk, his friend, Barry, "We're computer programmers for FEMA, here for our CDLs (Commercial Driver's Licenses)."

Pearl, nodding her head as if his less-than-thorough explanation made perfect sense, moved on to the next row with an authoritative point of her age-spotted finger.

I felt a strong urge to ask why two computer geeks needed a CDL, but I did not want to blow my cover as the hobo idiot, so I bit my tongue.

Behind Tunk and his sidekick sat Randy. He had a lot to say. If anyone, since the invention of the wheel, was born to live his life atop 18 of them, it was this man. He was visibly excited to be there. He sat on the edge of his seat with a new notebook and freshly sharpened pencils at his side. His enthusiasm was almost contagious—almost.

If you could see only his face you would think the mustache was part of a child’s Halloween costume. He was wearing a Dale Earnhardt cap, but one could see a full head of wavy blonde hair that still maintained a tiny remnant of what was once a spectacular mullet. He said he was 34 and he had wanted to be a trucker his entire life. I wondered why he waited until his 34th year to actually do it, but, again, refrained from asking. Though I was surprised he actually admitted it, I was not surprised that he lived with his mom because his brother lost the lease on the trailer they had been renting. His job—as a paperboy—wasn’t paying the bills.

Behind Randy loomed Travis. Perched, slumped, peered, leered and sat in all his glory—Travis. His presence was like a bright blacklight that simultaneously made the room a little more intriguing and a lot darker. He wore all black save for a white (and black) skull and crossbones bandana hanging out his back pocket.

Travis was very fat. Not surprisingly his previous jobs included Little Caeser’s pizza cook, delivery boy, custodian and manager, where he likely paid particular attention to product quality. Surely there are nicer ways to phrase Travis’s girth: portly, large, horizontally generous, overweight, etc. But Travis was fat, grotesquely fat, and he seemed cool with it because, fortunately for him, he was also tall.

There is not a doubt in my mind that he weighed close to 400 pounds and stood at least six foot six inches.

Travis explained that he wanted to be a trucker because he heard it paid well and he thought he would be good at it. It was evident that he had a knack for sitting, so I didn’t doubt his contention. He said he wanted to go cross-country; but had to wait until his probation ended. Yet again, I had to refuse the urge to ask, this time out of justified fear than a want to maintain character.

Paul was next. He was actually the first person I "saw" when I walked in but, thanks to the blinding brightness of the room I was spared the tragedy of actually seeing him. He looked like he had been sparring with George Foreman, or maybe Travis. Before Paul could begin to explain, Travis mocked, "Why do you look like road kill?"

He hemmed and hawed his way through a story about how he wrecked a forklift while at work and was in our class because he had, despite his obvious lack of driving ability, been promoted to yard dog (truck drivers who move trailers around a shipping yard). He had two black eyes that looked like they were about a week old; above and below his right eye socket sat deep-red scrapes that two days ago I would have called gashes. His ear on the same side of his face looked like a chewed piece of cherry bubblegum and surrounding it was peeled away, and not yet scabbed, scalp. Sitting on his table was the largest tube of Neosporin I had ever seen.

Pearl actually shuddered, scrunched her face and made a shiver sound before pointing at me, very professional.

Thinking simplicity was the order of the day, if not the next year of my life, I skipped details and quickly explained, “I grew up in Iowa and have lived in Colorado for the last 10 years.” Not sure how to downplay my previous job, hoping it wouldn’t come up, I started lying through my teeth. “My uncle was a truck driver when I was a kid, and ever since then I’ve thought it would be fun to do. I guess that’s about it. Oh yeah, I plan to go over-the-road and eventually get my own rig and work for myself.”

No one else answered that part of Pearl’s question, but I thought I should cover as much as I could, bullshit or otherwise, hoping that it would be less obvious when I “forgot” the part of the inquisition about our former jobs. Pearl, who surely knew my history from Tom and obviously got a kick out of seeing people squirm, asked, “And,” she paused and looked at me with a subtle but unmistakable sneer, “What did you do before?”

“I, uh, was a tutor for elementary and high school kids.” I didn't care to explain that I helped rich kids improve their SAT scores.

Pearl, “Oh, Tom told me you worked for a company that helped rich kids pass the SAT.”

Damn it, Pearl. Lies, lies, lies. “I think they did that too, but I just helped younger kids with math and reading.”

Pearl was content for the time being. She had a kind, almost caring and grandmotherly way about her, so the only reason I can think of for her to intentionally build resentment for me was her obvious appreciation for making people uncomfortable, it must have been entertaining to her, nothing more nothing less. With my grilling finished, she introduced herself.

Pearl Strong was one of a just a handful of solo female truckers when she started driving over thirty years ago. She welcomed us to call her Summer Wind, as she had been called that longer than she’d been called Pearl. She was petite and in remarkably good shape despite her tendency to be smoking as opposed to not. Her voice sounded a little like she had been gargling sand instead of mouthwash every morning. She had surely given the same introduction speech to scores of previous classes so before anyone could ask, she claimed to have sounded that way since she was a teenager, though in the same breath she admitted that she started smoking at 11.

nondescript in her dress and style with the exception of her hair. If it was “styled,” it was styled years ago and it’s been subjected to Aqua Net over and over ever since. It was mostly gray, though dark streaks remained throughout and just above her eyes, impossible to miss, was a shock of what looked like golden blonde bangs tightly curled and sprayed firmly in place. It was constantly distracting. I wondered if she was cutting the edge of grandma-trucker fashion or just had a terrible dye job. Either way I was happy to see it because I was happy to see anything I couldn't have seen from the desk I abandoned a few days earlier.

When the introductions ended, we took a break. Lord knows we needed it. We had been sitting there for at least thirty minutes and had mastered two crucial points: Barry didn’t talk and Paul shouldn’t.

Eric West was often told “write what you know” but he believed a better approach was to “write as you know.” This is his first book, though he has read at least five—most without pictures. He currently lives in Des Moines where he feeds his dog twice every day.