The Manufactured Scandal That Overturned an Election 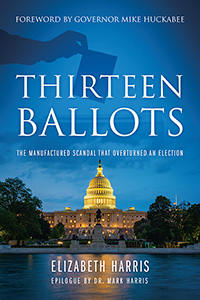 The Manufactured Scandal That Overturned an Election

“They’re going to try to steal the election.”

A friend’s text popped up as Beth Harris rode a chartered bus back to a Washington, D. C. hotel November 27, 2018. It gave a dire warning. “They’re going to try to steal the election.” A Democrat member of the state Elections Board had just challenged her husband Mark’s victory in North Carolina’s Ninth District Congressional race. This is the story you didn’t hear in the mainstream media, told by the people who lived it.

“No issue is more urgent in America today than election integrity. Thirteen Ballots reveals how unelected, unaccountable bureaucrats wield their power in elections, and how the Left plays the system for its own ends.” Tony Perkins, President, Family Research Council

“Wow! Beth has shown how two people can endure sickness, embarrassment, hatred, and the theft of their dreams. They walked through fire and came out on the other side stronger, with more love for each other and others, and a more beautiful walk with God.” Janet Huckabee, former First Lady of Arkansas

“I personally campaigned with Mark Harris and his wife Beth for North Carolina’s Ninth Congressional District seat. Over eleven million dollars was spent trying to defeat this humble pastor. Reading this book will be a warning for all who have believed the myth that supposedly non-partisan appointees deserve to manage our elections.” Lieutenant General (Ret.) William Boykin, Executive Vice-President, Family Research Council

“Beth carries us through her trauma, pain, and the injustice brought about from a broken political system. This book will leave every reader more aware of how diligent we must be to hold to the values this nation was founded on.” Dr. Mike Whitson, Senior Pastor, First Baptist Church Indian Trail, North Carolina

Elizabeth Harris is the wife of pastor and 2018 Congressman-Elect Mark Harris. A wife, mother, grandmother, and pro-life activist, Elizabeth has seen the political world up-close and personal through her involvement in the Republican Party and her husband’s three political campaigns.