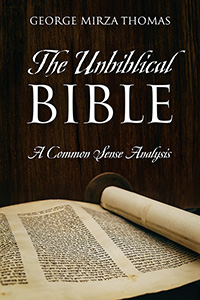 The Word of God—or Just Words of Man?

The Bible is the central book of two religions—Judaism and Christianity. The Old Testament is the purported history of the Israelites, written and compiled mostly around 500 BCE during the Babylonian Captivity of the Jews. The New Testament, which was put together around 397 CE, lays out the life and ministry of Jesus Christ, and relates the history of the early Church. With historical and scientific research, this insightful book makes a strong case that the Bible is not what it claims to be. The story of the Creation, the Great Flood, and many other cornerstone stories of the Bible are just myths . . . including Exodus. There is no evidence that the Jews were ever slaves in Egypt; they did not cross the Red Sea or roam in Sinai. There is good evidence that Jesus lived and was crucified, but many accounts of his life are not recorded anywhere else in history. The stories, commandments, and statements that Jews and Christians use to govern their lives are based in fiction. With careful skill, The Unbiblical Bible debunks the idea that the Bible is a God-given religious resource. Whether you’ve already begun to doubt the Bible or you’re new to the idea that a healthy skepticism is appropriate, this book will give you food for thought, and ideas to assist you on your path to a greater truth.

GEORGE MIRZA THOMAS grew up in Baghdad Iraq. He has extensive knowledge of the Bible from decades of study and research.