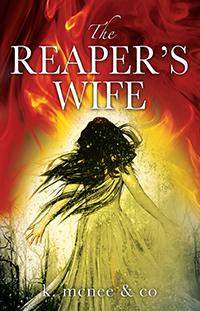 Is she the choosen one?

The heat raged with retribution, developing experience with every spark released. It grew massively strong, tall, and surface area.

…She was the fire. She was raging with retribution, taller, stronger, and gained more experience with every flare released.

…She admitted to herself that the only intolerable thing about being one with the flame was the damage to her appearance. Her dermis changed from porcelain to copper and the loosely charred dead skin flew with the wind.

She rotates her head, owl-like, surveying the room. The square area around her was minuscule; there were rhythmic, infrequent intervals of wind coming through the open window high above ground level, enticing the flame. The guilty red-stained black walls were practically invisible, blocked by miniature bookshelves not occupied with books but jars, glasses, pipettes, and undefiled candles. Strange liquids rested inside them. Catching her eye, a decaying ash-brown five-foot toothpick podium stood amid the upper right corner. On top of the podium rusts away a forgotten war-fought, gold and black manuscript that he used.

He was there too. She saw his silhouette now, most of him hidden within the opposing lower walls, but she knew. He observed her, took mental notes, and made conclusions like she was an experiment. It was admirable, the way he was meticulous about things. He was reserved, but everything about him was concise, deliberate, and mindful. His true qualities took time to pinpoint, but she knows now that he is the slow-and-conquer type. Time was not a problem for him—there was no need for haste. That’s something she admired about him.

K. McNee & Co. is the author of The Reaper’s Wife and more. For more info visit www.kmcneeandco.com