The Quest to Know 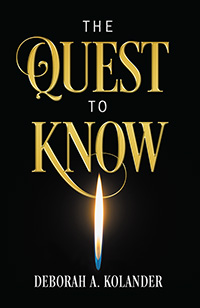 The Quest to Know

"The Quest to Know reflects the inner asking of its communicant of the Source. In a deep and resonant language which has the authority of a Higher Intelligence, the concepts are expressed in words that go beyond the ego’s perception and penetrate the awareness of Self."
—Judith Skutch Whitson—Visionary, Publisher of A Course in Miracles

As a child, Deborah Kolander was acutely aware of the effect of her thoughts, feelings, beliefs, and projections on her environment. Over the years she was driven to seek answers, a greater guidance or truth to understand the world both seen and unseen, and through automatic writing, she began to bring through illuminating teachings and messages. Nearly three decades later, Deborah continues to share her channeling talents with groups and individuals worldwide. The Quest to Know is an offering of these channeling sessions, with responses that will permeate your being and support your own awakening!

Deborah A. Kolander is a licensed minister, spiritual counselor, and quantum biofeedback facilitator, supporting wholeness in body, mind and spirit. She and her husband Mark live in Kailua-Kona, Hawaii.