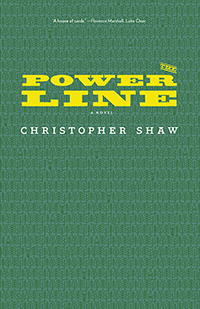 What really happened at Donnelly’s Corners in the spring of 1929?

In the nineteen-eighties, an amateur historian of the Adirondacks recorded the fading memories of an aging woodsman and bootlegger, searching for details about the old-time fiddle player and rustic builder Fran Germaine. The woodsman’s wild tales faded into dust more than once until the discovery of a diary kept by Rosalyn Orloff, the socialist writer and political theorist of the twenties and thirties, and reputed lover of the psychoanalyst Carl Jung.

The Power Line travels from the villages of Lake Aurora and Saranac Lake, New York in the years following World War I, when Prohibition and tuberculosis kept them hopping, to Montreal and a thrilling escape by canoe across the St. Lawrence River in the dead of winter. It connects lives and periods often overlooked in the history of northern New York and the Canadian borderlands, shining light on the continuity of a disputed and murky past with a living and recognizable present.

“Well, I don’t know how much there is to say about Fran Germaine and how me and him met Jack Diamond and got into the bootlegging racket. It was a day I’ll never forget, though, I’ll tell you that.”
Lonnie Monroe twisted his face up into a weird mask, the kind he made to emphasize a point. He sat across from me in a booth at the Trap Dyke tap room in Lake Aurora, New York, in the Adirondacks. His blue eyes were watery and he hadn’t shaved that morning, so his white beard prongs stuck out in all directions from his leathery face. He was otherwise well turned out in his retired-old-timer garb of pressed tan Dickies, a felt Moose River hat and Russell moccasins with white wool socks, rolled down. I’m doing this to make you happy, he seemed to be saying. Now let’s just get it over with.
It was June, 1983. I had been pestering him for weeks to sit down and tell me about Fran Germaine and what happened at Donnelly’s Corners in the twenties, but he couldn’t get used to the idea of talking into a machine, of cementing into the deep past something he clearly viewed as a living reality. Much was hinted around here about Fran Germaine, but little known. Everybody’d heard fragments, but never in any coherent or very plausible form. Lonnie’s versions left a lot of holes. He was a known embellisher, but not getting any younger, and I hoped to get his story down on tape while I still could.
Finally, because of his affection for Germaine’s granddaughter, Sonja, he agreed.
“He was her granddaddy, so she deserves to know,” was how he put it.  I hoped I could just keep him focused long enough to see if there was really anything there.

Christopher Shaw is the author of Sacred Monkey River: A Canoe Trip with the Gods; The Crazy Wisdom: Memoir of a Friendship; and Adirondack Mind: New and Collected Essays (both forthcoming). He edited Adirondack Life in the eighties and taught writing at Middlebury College for twenty years. CSHAW.NET MILLER POND EDITIONS SARANAC LAKE, N.Y.