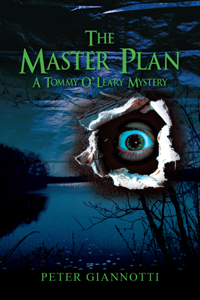 A killer’s Master Plan unfolds before your very eyes

New Haven Police Detective Tommy O’Leary and his new partner, Susan Kendall, are assigned the murder investigation of a local abortion doctor. The grisly scene both shocks and horrifies the seasoned detectives. As it turns out, the killing is only the first in a string of deaths in and around the Elm City. The killer’s targets are a who’s who of the local left wing political establishment. On the surface the killings appear to be politically motivated. However, the true motive is revenge, pure and simple.

Through twists and turns Tommy and Susan discover the truth of the doctor’s murder and find a link to the other killings that could turn the political establishment on its head. Witty and action packed, The Master Plan is a page turner that will keep you guessing until the very end.

Peter Giannotti has a Juris Doctor from Suffolk University Law School and a BS in Business Management from Bentley University. He operates a small law practice in Connecticut where he resides with his wife and two children. This is his first novel. He is currently hard at work on his second Tommy O’Leary Mystery: Rock N’ Roll Star and Crescent.