The Lord of the Hallows 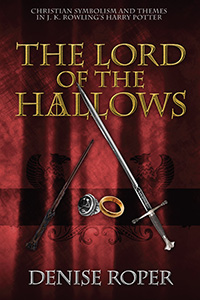 The Lord of the Hallows

THE LORD OF THE HALLOWS examines the Christian themes present in J. K. Rowling’s HARRY POTTER, and compares Rowling’s series with THE LORD OF THE RINGS by J. R. R. Tolkien and THE CHRONICLES OF NARNIA by C. S. Lewis. This book also gives a fascinating explanation of the sources of Harry Potter’s subtle religious symbolism, which includes a study of iconography derived from the Bible, the writings of the Early Church Fathers, Ancient and Medieval bestiaries, Christian artwork, and the Arthurian quest for the Hallows of the Holy Grail.

Denise M. Roper has been a guest lecturer on the deeper meaning of J. K. Rowling’s Harry Potter novels at fan conventions, book stores, and public libraries. She attended her first Harry Potter symposium, Phoenix Rising, in 2007, which led to her becoming a presenter at Portus 2008 in Dallas, Texas and Azkatraz 2009 in San Francisco, California. She is a member of the Mythopoeic Society, devoted to the study of the works of J. R. R. Tolkien and C. S. Lewis. Denise is a graduate of Louisiana State University, where she received her Bachelor of Music Education and Master of Music degrees. She currently teaches instrumental music in South Louisiana.