The Legend of King Max

by Nina Dalberg and Richard Hinrichs 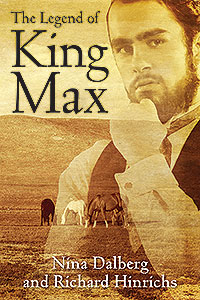 The Legend of King Max

by Nina Dalberg and Richard Hinrichs

A Real-Life Legend: King of the Dakota Territory!

The Legend of King Max begins in 1954 with the arrival of young news-hawk, Paul Sullivan, to the small North Dakota farming community of Lidgerwood. Out to make a name for himself, Sullivan has been invited by the editor of the weekly paper, Benjamin Zwick, to cover the fascinating story of the town’s builder, Ralph Maxwell. Distracted by the editor’s spirited niece and staff reporter, Cathy, Sullivan soon finds himself enthralled by the tale. One of the most complex and controversial individuals in the history of the Dakota Territory, Ralph Maxwell was the subject of numerous newspaper and magazine articles. Although very little is actually known about the man, described by some as a crime boss, an ‘angel of darkness’, he was seen by others as a powerful man of vision. Told in alternating perspectives, the story looks at rural life in 1954—a time when there were still people alive who knew Maxwell and the wild and woolly 1880’s west in which he lived. The authors try to reconstruct what may have influenced the crude Canadian lumberjack to transform himself into a polished gentleman, a shrewd entrepreneur and a dangerous—and deadly—opponent. Rich characterizations introduce some of the many immigrants, those from abroad as well as others from failing farms and businesses across the U.S. All of the new settlers were hoping to make their homes and earn their livelihoods on the prairie. These hardy men and women knew there would be struggles; whether it was the prairie wildfires, the bugs, snowstorms, disease, or drought. They found themselves the victims of outlaws who preyed on them; thieves, rustlers, bootleggers, gamblers. Located in a triangle of rough unclaimed land, straddling the undefined North and South Dakota border, the area was filled with hollows, coulees, lakes, rivers and deep draws. It became a haven for law-breakers. Officers of the law were few and far between and law enforcement was virtually impossible. This strip of the Sisseton-Wahpeton Sioux reservation was ripe for exploitation. Maxwell came along with the goal to make Lidgerwood more than just a spoke in the wheel of commerce. He wanted it to become a major hub of the Midwest and his personal kingdom. Maxwell listened well, learned what he needed to know, and built the small town by knowing who to manipulate, where to put his money, and by keeping his focus on his goal. Lidgerwood soon became known as one of the toughest gambling towns between Aberdeen and Saint Paul. Aided in his endeavors by a group of loyal friends he gathers around himself, will Maxwell learn too late to value those close to him? Will his pride and desire for vengeance bring about his eventual downfall? Or will his friends be able dissuade him from his course of revenge?

Nina Dalberg’s career has spanned advertising, radio and TV news, as well as freelance reporting for several newspapers. She holds a degree in broadcast journalism from the University of Montana. Nina and her husband Rodney divide their time between Rosholt, South Dakota and Springfield, Missouri. Writing is her favorite pastime, but she also enjoys reading, crafting, and genealogy. Nina welcomes your correspondence at: Nina05D@aol.com Rick Hinrichs attended North Dakota State College of Science and North Dakota State University. After several years as a business owner, Rick branched out into writing software for medical facilities; he also helped to build the fiber optic network system in Alexandria, Minnesota. Rick and his lovely wife, Barb, have been blessed with three children and six grandchildren. They live in Alexandria, where Rick enjoys reading, writing, playing his drums, football, baseball, and most of all, spending time with his family. Contact Rick at: dadiodrummer@charter.net