The Last Shall Be The First 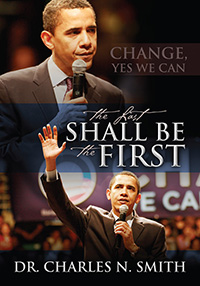 The Last Shall Be The First

Barack Obama, rock star, the new "Jubilee", a prophecy fulfilled ,the hope of a people forgotten or a man whose time has come: you will be the judge.

I was inspired to write this book when I realized that Senator Hillary Clinton, a woman, and Senator Barack Obama , a Black American, had a very good chance to become, for the first time in history, the nominee for the Democratic Party and candidate for the Presidency of the United States.

It was the first time in history that candidates from two groups that had to fight for their rights as citizens of this country had reached that level. However, as I watched closely, I began to realize that the true person for this giant task, at this particular time was Senator Barack Obama. He brought a different flavor and sense of commitment to this presidential campaign that no one else in the past has been able to do.

In this book, I attempt to demonstrate that every time a Black American has broken down barriers and succeeded in his or her career, it has only made America better. I want America to see that Black Americans have always had to run from the back of the pack in order to get to the front and achieve success; but each time they have run and won, America has become greater. I want Black Americans to believe in their history and believe that America can support a Black American for President, especially one who believes in all Americans, regardless of race or ethnicity. I believe that Barack Obama's time is now. He is the new "Jubilee"; a leader, ready and able to lead America.

Barack Obama, rock star, the New "Jubilee", a prophecy fulfilled, the hope of a people forgotten or a man whose time has come: You will be the judge.

This book is so critical at this time because so many of our young people--Caucasian, Black, Asian, Latino/Hispanics and others--have lost faith in the presidency and current leadership.

The country is crying for someone with a fresh outlook who sees America as she should be--a country where all Americans can believe in the true American creed.

This book is to offer hope and courage to those who may have given up on their dreams or lost the desire to continue to strive to reach them.

Many older Americans have also lost faith in our government's ability to assist them in having a better life--a life that many have worked all of their lives to secure and now find that with each day the challenges to make life better for their families and themselves have become increasingly difficult.

Dr. Charles N. Smith is Vice President for Student Affairs at Alabama State University. Dr. Smith earned a B.S. in Psychology and M. S. in Rehabilitation Counseling from Virginia Commonwealth University in Richmond, Virginia and an Ed.D in Higher Educational Administration from Virginia Polytechnic and State University in Blacksburg, Virginia. He has written two books, one entitled, On The Sideline or In The Game, the second, A Funeral A Wedding and The Journey Between. He currently lives in Montgomery, Alabama with his family. He loves to write and believes that this 2008 election will be the most historical election since, Thomas Jefferson, Abraham Lincoln, and John F. Kennedy’s.