The Inner-City of Phoenix, Arizona 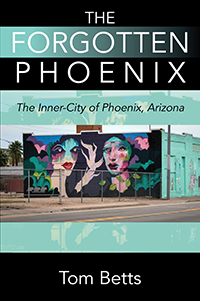 The Inner-City of Phoenix, Arizona

The Phoenix You Never See

Phoenix, Arizona is a modern, pleasant, and exciting city that is increasingly a destination location for its climate and amenities. However, like most major cities in the United States, Phoenix has an inner city that few are aware of or want to know about. This part of the city is run down, with neglected, abandoned homes and buildings. Crime is common, and people retreat into houses with gates, fences, and bars on the windows, hoping to maintain safety and privacy with “No Trespassing” signs on their front doors. There are homeless and others in distress, wandering the streets with nowhere to go. Restaurants and stores struggle to stay afloat and serve the needs of those in the area. This book of photos reveals the stark truth of the forgotten city of Phoenix—and the people who deserve to be noticed, respected, and seen. 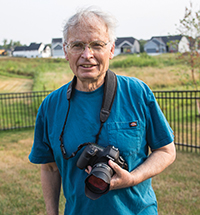 Photographer Tom Betts has lived in a wide range of American cities. He grew up in Coeur d’Alene, Idaho and Spokane, Washington, and has lived in Portland, Denver, San Francisco, Bettendorf, and Des Moines. He spent his working career as a court administrator in Bettendorf before retiring in 2005. Later he bought a Canon camera at The Camera Corner photography store in Davenport, Iowa and his interest in photography took off. He and his wife now live near Phoenix. They have a daughter and three grandchildren.