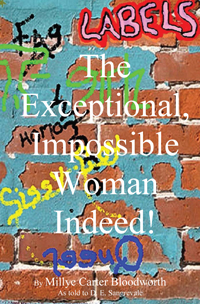 THE AWESOME, ANTI-BULLYING ADVENTURES OF THE TRANSGENDERED TRAILBLAZER!

Milton Bernie Carter was born in East St. Louis, Illinois into a loving family whose culturally diverse beliefs and mixed racial bloodlines made for “many socially sensitive but usually supportive conversations in the home.” Born under sign of Leo, he was told, “You’ll be ruled by the heart, and that means you’re always going to think kindly of people.” If only the same could be said about many of those whom Milton would come in contact with throughout the years, even today. It was the early-1960s, in East St. Louis, Illinois when young Milton began experimenting with cross-dressing. By the time he was thirteen, though feeling like eighteen, he felt even more trapped in his skin “hating the male anatomy” the doctor saw fit to leave him with as an infant. More questions about his own sexuality arose after Milton with his mother consults a local female physician who tells him his condition is “transgenderism or transsexualism.” Thereafter, Milton begins to develop two feminine personas, Millye for the good side and a persona of Melba for her other side. After her mother remarried, the rest of his formative years were spent in Detroit, Michigan and after high school, an AA in Liberal Arts from Highland Park Junior College was earned and shortly thereafter there was an initial career choice of nursing with secondary schooling followed by a short stint in the U.S. Army that would take Milton to Eastern Europe and back. After fully transitioning she would go onto a variety of billing, claims and discharge planning positions in the medical field, sales and modeling with Saks Fifth Avenue in Detroit, then Phoenix and sales, modeling and buying for Dittrich’s Furs in Detroit and wedged in-between there has been stints as an exotic dancer with other services, modeling haute couture and fashion show producer, small business owner operator of a hospice and care home, and for the past decade employed first as a cook, then custodian, and currently as a life skills and teacher’s aide for developmentally disabled children in the local elementary school districts and has been married to her husband, Donald for two decades and they have been together for thirty years while living in Phoenix, Arizona.