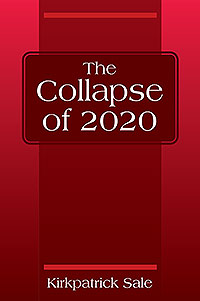 In this short, powerful, and thoroughly documented book Kirkpatrick Sale, who has been on the cutting edge of American social commentary for fifty years, makes a compelling case for the dangers that this world faces now and the real possibility of the imminent collapse of civilization as we know it. It is a work that is a must-read for those who are prepared to figure out how to survive this coming catastrophe.

“If it’s radical and leading edge, Sale probably wrote about it sooner and better than anyone else.” – Utne Reader

“I am filled with admiration.” – Joseph Heller, author of Catch 22

“His topics of concern are broad and expansive, just as they always bring the reader back to basic valuing of community, nature and sustainability.... Honest, forthright, and so clear in his perceptions that you can’t help but be affected by them.” – Chellis Glendinning, author of In the Company of Rebels

Kelly challenged me to spell out in exactly which ways modern technology
would likely cause the collapse of civilization as we know it—and
when that would happen.
I was stumped for a bit because first of all it was hard to isolate
just a few ways in which such a monumental catastrophe would come
about and secondly I had given absolutely no thought as to when.
Finally I blurted out “2020” because it had a nice familiar ophthalmological
ring and at that time it seemed far, far away, and I tried to lay
out in as succinct a way as I could how it could happen.
First, an economic collapse. I posited that it might take the form of
a worldwide currency devaluation, in which the dollar loses its standing
as the world’s reserve currency and becomes effectively worthless
even in this country, and a global stock-market crash and depression.
Second, a political collapse, with upheavals both within nationstates
and between. I saw the collapsed economy leading to maybe the
bottom fifth of society in the developed world, no longer bought off
with alcohol and drugs and celebrity and consumerism, rising up in
rebellion and creating havoc and disarray throughout; at the same time
a similar rebellion of the poor nations, no longer content to take the
crumbs from the table of the rich, and simultaneously fighting violent
guerrilla wars and flooding into the developed nations to escape their
misery.
And finally, perhaps over-arching, an environmental collapse, in
which global warming and ozone depletion, for example, made some
areas like Australia and Africa unlivable and caused ice packs to melt,
and old diseases, released from melting ice and deforested swamplands,
mixed with new and spread deadly infections to all continents.

Kirkpatrick Sale is the author of fourteen books over fifty years, including studies of Christopher Columbus, Robert Fulton, homo sapiens evolution, SDS, and the Luddites, and the classic epic on human scale.