The Best Care In The Air 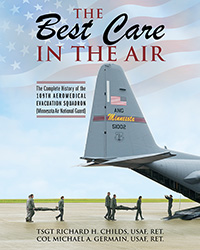 The Best Care In The Air

With the words “We’ll take one!”, then Colonel Leo Goodrich brought to the 133rd Airlift Wing of the Minnesota Air National Guard a new unit with a very specific mission - transporting injured personnel from one point to another via airlift. Decided virtually ‘on a whim’, Col Goodrich set in motion the saga of the 109th Aeromedical Evacuation Flight/Squadron.

The story begins with a Prologue that provides a brief, backward glance at the history of the Minnesota Air National Guard and also tells how the squadron came to be. The authors then chose to uniquely organize the book by chapters dedicated to the commanders who led this incredible unit throughout the years. Written in a distinctive style reminiscent of military logbooks, these chapters are chronologically organized by years and subdivided into months detailing an exhaustive, comprehensive account that covers the unit from its initial organization in 1961 to present day. Commanders’ notes, interviews, excerpts from wing and squadron newsletters, personal stories, and letters from deployed squadron members capture the life of an airman throughout this unit’s 60 years of existence.

As detailed in the book, early squadron members had no uniforms or training materials and training was conducted in-house until formal school slots became available. At one time, the unit’s survival was even in question. The story continues detailing how the squadron overcame these and many other obstacles throughout the years, transforming itself from the “stepchild” to the pride of their wing, and in the process garnering national recognition in the Air Force and National Guard with numerous awards for its innovation and performance.

Participating in all contingency operations since the Cold War through the first two decades of this century, these aeromeds regularly rotated on and off deployments that took them all over the globe. Their exploits are chronicled within these pages ranging from light-hearted to sobering stories offering genuine insight into the realities of war and conflict as experienced by all unit personnel.

The book concludes with several noteworthy appendices including a squadron patch history, a historical perspective on training flights, a list of all conflicts the unit members have been involved in, aircraft in which they have flown, and a touching story of how retired members of this closely knit unit have maintained ties with one another in recent years. In addition, a wide variety of photos are interspersed throughout, adding an important visual dimension to this work.

One book reviewer writes: “As I began to read, an engaging, warm and very human story soon emerged – a story about dedication, kindness, fun, courage, personal sacrifice, and determination by real people with personalities who, in spite of often stressful circumstances, carried on, did their duty with good spirit, and gave of themselves for the benefit of others.” This is a great read for not only those who have served with the unit and their families but for those who are interested in a historical perspective of how everyday citizens have transformed a fledgling unit into arguably the best aeromedical unit in the United States Air Force.