The Art of the Haunted

The Art of the Haunted

A THRILLER WITH A HEART

A group of inner city delinquent boys is engaging in a horrible crime of violence, when suddenly a strange man appears. He is immediately attacked, but he defeats their aggression. He subdues them and makes them listen to scary ghost stories, throughout the night until help arrives. The unwilling audience becomes enthralled by the excitement and thrills, and the mystery, as slowly the stranger captures their hearts and minds. Finally a tale of Islamic Jihad in 12th Century Spain directly relates back to their own conflicts in the modern urban so-called “ghetto”. The tales all touch on art, and the stranger is an artist, a tortured soul whose gifts and skills transform their lives, but at a terrible cost.

The author had formal training in the Fine Arts, had been a painter, and had mentored inner city delinquent boys. The author also amassed a vast collection of antiquities from the world's great ancient cultures, each piece having its own story. These factors in the author's life directly inspired this fearful tale of mystery and harsh reality, yet touches the heart with love. 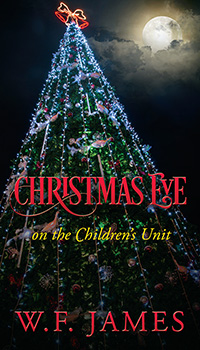