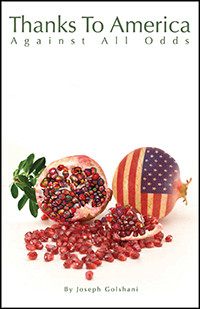 In an effort to further his education, Joseph Golshani came to America over thirty years ago with the intent of returning to Iran, but he soon realized the tremendous opportunities that were offered him in this country. He remained in America and made a name for himself. In Thanks To America, Joseph chronicles his journey, while giving thanks to the country that provided opportunities he never dreamed possible. Along the way, Joseph shares his trials and triumphs, and his affirmative outlook with a straight-forward philosophy, and he does so with humor, humility, and grace. "It has truly been exciting to watch Joseph over the years in his personal and professional journey. His trust in people through his leadership and mentoring exemplifies and complements every part of Joseph's life and adds meaning to everything he chooses to achieve." Lin R. Rogers Chairman, Rogers Electric & Holt Investments "I am honored to have known Joseph for almost 25 years, and to be considered a part of his journey to success; I know that my late husband, Edwin Neill II, would be so proud to see what Joseph has achieved throughout his life and to know that his words are remembered by him. Joseph is a true example of someone whose success has been achieved through his belief in the positive, surrounding himself with people that contribute to who he wants to become, and his dedication to supporting others. I wish Joseph the very best and am excited to see what he will achieve next." Debra Neill Baker CEO, Neill Corporation "It has been an honor to know an Iranian-American that has brought great dedication and passion to not only the beauty industry, but this country as well. Joseph has had a successful career in simply following his dreams and his heart. Knowing Joseph and watching his success has been a pleasure and privilege and I look forward to seeing all the blessings he has ahead of him." Arsalan Hafezi CEO & President, Modern Salon and Spa 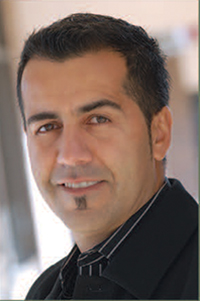 Joseph Golshani is the owner and CEO of Joseph & Friends Lifestyle Salon and Spa, a transformative beauty enterprise he created over twenty-five years ago, with multiple locations throughout the Atlanta, Georgia, area. Joseph continues to revolutionize the beauty industry with his philosophy of creative change and its positive effect on the community. By creating a specific training program for his team, he ensured a consistency that can be found in each of his salons. Featured in numerous television programs and named Head Master in Atlanta in 1999, Joseph Golshani continues to inspire people with his talent and a belief that everyone can change the world for the better. Visit thankstoamerica.com for more information about Thanks To America.