Tea Party Revival: The Conscience of a Conservative Reborn

by Dr. B. Leland Baker 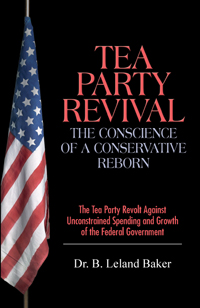 Tea Party Revival: The Conscience of a Conservative Reborn

by Dr. B. Leland Baker

THE ESSENTIAL GUIDE TO THE

From Sarasota to Seattle, something incredible, unprecedented and heartening is occurring: People are coming together to take back their country. They’re saying “enough is enough” to big-government schemes that serve only to fleece our pockets. “Enough” to growth of federal power, and “enough” to the expansion of so-called “rights” that just add more layers of bureaucracy.

Tea Party Revival: The Conscience of a Conservative Reborn is the essential guide to this grassroots and growing movement, which burst onto the national stage with the massive 2009 Tax Day Tea Party protests and 912 March upon Washington D.C. Concise, engaging and at times enraging, Dr. B. L. Baker shines a light on the worst habits of government and — most important — what we must do to salvage our ideals.

Favoring neither Republicans nor Democrats, Tea Party Revival outlines how true constitutional compliance leads to smaller, limited government, which results in lower spending, lower taxes and greater freedom for all Americans. It explains how overspending has placed our children and grandchildren in fiscal bondage for the next century, while answering, “How did it come to this?” Through it all, Tea Party Revival arms you with the information you need to cut through the media and government’s obfuscation — so you can take your country back.

The President and Congress need to ask the right question: Not how, but should?

The real question isn’t “how” to provide equal health care to everyone, but “should” citizens authorize the federal

government to expand its power through a new amendment

to the U.S. Constitution that authorizes governance over health care.

Every citizen has the right to purchase their own health care; but socialized health care is not a federal

through a constitutional amendment. But, Mr. Obama

is not seeking an amendment to legitimize his vision of

Emotionally based arguments for more money do not erase the fact that the federal government has not earned the trust of the already overburdened taxpayer.

Mr. Obama stated that two-thirds of the cost of his new health-care plan could be recouped from Medicare and Medicaid. A more prudent course of action would be to improve efficiency, costs, and coverage in Medicare and

Medicaid, while simultaneously seeking an amendment to the Constitution authorizing federal government intrusion.

Mr. Obama stated that his plan would be revenue neutral – not adding a cent to the deficit, which is not fiscally possible. The government cannot increase spending for the health care of 30 million people without increasing cost. This is an intellectually dishonest promise of hope over reality. Anyone with an ounce of common sense can spot a snake oil sales pitch; unfortunately, few of our elected officials possess one ounce.

On September 9th 2009, during a televised speech, Mr. Obama stated, “The plan will not add to our deficit. The middle-class will realize greater security, not higher taxes. And if we are able to slow the growth of health care costs by just one-tenth of one percent each year, it will actually reduce the deficit by $4 trillion over the long term.”

If we save one-tenth of one percent each year, it would take 2,000 years to reduce the deficit by $4 trillion. Do they teach math at Occidental College, Columbia University, or Harvard Law School? Tea Partiers want to know!

Dr. B. L. Baker served in Europe, Asia, and the Middle East for 26 years with the United States Army. His oath to support and defend the Constitution against all enemies, foreign and domestic, led to his investigation of individual freedom, government control and economics. He is a professor of management at a private university.