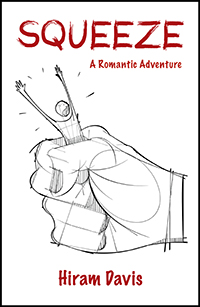 After a hard-hitting romantic breakup caused by his misinterpretation of the unsaid, a perplexed Cooper Landry blames his past for the failure. He equates distance to therapy and accepts a career opportunity in Central America, presuming to change his fate by changing its setting.

En route, the real trouble begins when his abduction and imprisonment by a drug cartel redirect his objective to survival and escape, despite forced addiction and man-eating dogs. When Quinn Daltrey, the woman with whom he shared the romance, discovers he has gone missing, she follows, intending to find and save him, though she has no plan.

This literary soup is layered with adventure, romance, and thriller. Some of it is true. Much is imagined. It navigates universal desires and unbound danger as each lover follows their path to discovering that one’s destiny can be shaped rather than surrendered to chance.

Hiram Davis lives in South Louisiana, between New Orleans and Baton Rouge. Much of his time is dedicated to the operation of the hot sauce company he started 25 years ago. If interested, the website is Cajunsauce.com. What time remains is spent living the dream.