"through, with and by" 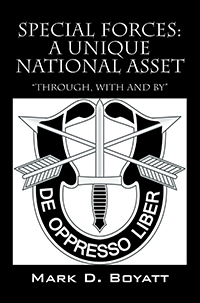 "through, with and by"

“Through, With and By”

There are plenty of Special Operations Forces and plenty of elements that claim to be Special or Special Operations Forces, but there is only one organization that is Special Forces—the Green Berets. Outskirts Press Releases New Book by Mark D. Boyatt, U.S. Army Special Forces Colonel Retired: Special Forces—A Unique National Asset: “Through, With and By” March 5, 2016 – Denver, CO and Fayetteville, NC – Mark Boyatt’s new book is an insider’s guide to the U.S. military’s Green Beret Special Forces—who they are, what they do, and what their role is in unconventional warfare. Special Forces—A Unique National Asset has been published by Outskirts Press, the fastest-growing full-service self-publishing and book marketing company. The term “special forces” is often misused by well-meaning but ill-informed people, including the news media, pundits, and even those in the military. The Army’s Green Berets are the only Special Forces in the United States military and represent the most adaptable and specialized organization in the nation’s arsenal. And their exploits hold a special fascination for the American public. Special Forces also defines “unconventional warfare.” Boyatt makes the case that unconventional warfare is a U.S.-supported and conceivably inspired insurgency or revolution. It is total warfare for the indigenous population, who must use every means at their disposal to effect regime change, whether they are a tyrannical government or an occupying power. The Green Berets’ adopted motto, “De Oppresso Liber,” which is Latin for “to free the oppressed,” is a call to duty special to this elite military force. While attending the Army War College, Colonel Boyatt authored a paper that originated and defined the term “through, with and by,” which is now codified in military doctrine and is the subtitle of his book. It describes the manner in which Special Forces meet the military and political objectives of the United States, working “through, with and by” other people, such as indigenous populations, rebels and revolutionaries, the oppressed and persecuted, displaced persons and refugees. Special Forces accomplishes this unique work by living with, training with, fighting alongside and even, at times, leading these groups.

“Colonel Boyatt has produced the definitive history/text/white paper/investigative analysis/field manual/adventure story of the US Special Forces and unconventional warfare. Simply put: it is invaluable. You want to know what, why, who and how? Read this book!” —Frank Emerson, soldier, author, singer, patriot “Special Forces is an excellent and comprehensive history of one of our nation’s premier military tools. This is a vibrant description of how it works and how it can and should be used by our national leadership. (Boyatt) gets it right—warts and all—and it will be an invaluable teaching and reference tool for both military and civilian leaders interested in our national security.” —David Passage, US Ambassador/Retired, former NSC official and first Foreign Affairs Adviser to the Commander/USSOCOM 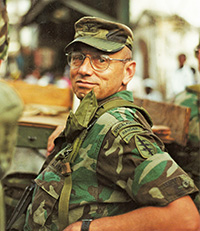