Quest For The Golden Sapphire 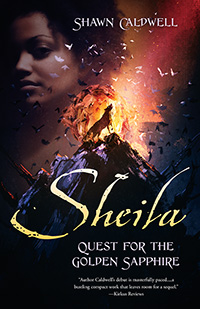 Quest For The Golden Sapphire

Sheila Domino is turning 15 . . . and her life will never be the same again

On the twilight of her 15th birthday, while blissing out on the screaming guitar of a Jimi Hendrix tune, tomboy Sheila Domino and her best friend are attacked by a clan of werewolves. Even worse, while fending off the mangy mongrels, Sheila realizes that her body is transforming into the likeness of her attackers… What the hell?! A dark stranger rescues the girls, ushering them into a new land called Thera. Once unsurpassed in elegance and beauty, Thera is now scarred by darkness and poverty. The stranger informs Sheila that her destiny is to save Thera from the tyranny of Benan, leader of the lycan clan called The Devil Dogs, but Sheila is unimpressed. She only wants to know how to make the physical changes stop before her boy crush realizes that they share the same interest in food and movies—as well as an abundance of back hair. But when her foster parents are brutally murdered by The Devil Dogs, Sheila must learn to use her gift of transmogrification to fight back. Will she be able to locate the golden sapphire and save Thera from total annihilation? Find out in Sheila: Quest For The Golden Sapphire, an enthralling new novel with a fun, fierce heroine.

Shawn Caldwell was born in Gary, Indiana, but it was in Morehouse Parish in northeast Louisiana that he found much of the inspiration for his writing. Shawn has a Bachelor of Science in Criminal Justice from Grambling State University and served as a retail investigator for nine years. His short story “Abe and the Old Man” was recently published by The Write Room magazine. He balances his time between worship, family, working, and writing stories. He and his wife and their four kids live outside Houston, Texas.