Secrets to a Creative Mind

Become the Master of Your Mind 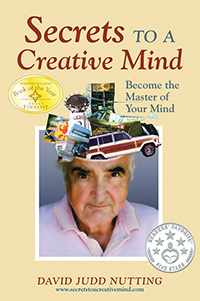 Secrets to a Creative Mind

Become the Master of Your Mind

Dave Nutting has spent the past 55 years of his professional career as a designer, engineer, inventor, entrepreneur, and as an author. He is a graduate of Pratt Institute with a degree in Industrial Design. After serving two years as a 1st Lt. in the Army Corps of Engineers, he joined the design firm of Brooks Stevens Associates. As a design consulting firm Nutting became involved in the design of Evinrude Outboard Motors, Mirro cookware, Bolens tractors, Studebaker automotive, and 3M products. For Willys Motors Nutting designed the first SUV the Jeep Grand Wagoneer, and went on to design the Enstrom helicopter. Nutting established his own group, Nutting Industries and created a series of coin operated amusement games, starting with the IQ Computer. Pioneering the world of arcade amusement rooms in malls, 22 Red Baron game rooms were established throughout the country. In 1970 Dave Nutting Associates became the R&D consultants to Bally/ Midway Mfg. In 1974, they created the first microprocessor pinball, then in 1975 the first microprocessor video game system and in 1976 the first video slot machine. Some of the more famous games produced by Bally/Midway were Gunfight, Seawolf, Pacman, Wizard of Wor, Gorf, Tron and Baby Pac Pin. In 1979, the Nutting group created the first personal computer marketed as the Bally Arcade. In his spare moments Nutting spent time studying Quantum Physics and in 2005 wrote a book “Language of Nature -Quantum World Revealed” so all the folks can understand the basics of the Quantum World. Nutting reveals some of his findings in Secrets to a Creative Mind that have never before been revealed!