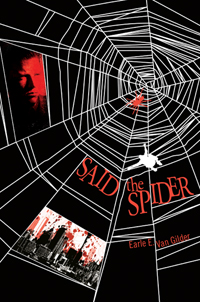 Sophisticated crime syndicate parasites invade the normally solid foundation of Midwestern banking and generations of established manufacturing. Executives and management usually in control suddenly find they are masterfully manipulated into a web of irreconcilable personal and financial seduction.

From the traumatic discovery at the river’s edge to the eventual confrontational conclusion Said The Spider seduces greedy, gullible and unsuspecting prey into a deadly and graphic whirlwind of corporate disaster leading to murder, suicide and revenge.

The early exploits of the juvenile crime spree by a youthful mastermind who cleverly manipulates his prey leads the reader to the ruthless genius manipulating the city. This drama of cause and effect with no escape from the temptations of lust, greed, and ignorance has been cleverly baited.

The corporate investigative agency and police sources enter almost too late to stop this whirlpool of turbulence as the bank Vice President’s realize their own failure and the investors and corporation officers panic and retreat from the coming Armageddon.

As murder, suicide and monumental financial losses are exposed, the crime syndicate learns of an investigation which might interrupt their lucrative operation. Crime bosses will stop at nothing to successfully complete their artistic looting of a major bank and manufacturing complex.

Time is running out. Investigators are pulling pieces of the puzzle together. Corrupt and greedy bank executives are running for their lives. The syndicate is charging ahead in their goal of complete domination and eventual departure culminating in a surprise and conclusive end to fraud and murder.

Catch me on my VIRTUAL BOOK TOUR! 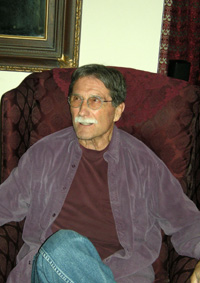 More than 40 years Earle (Doc) Van Gilder was involved in the investigation of white-collar crime. The last 20 years he ran his own Investigative Corporation partnering with major firms, local and state government agencies and law enforcement to solve a wide range of criminal activities from internal theft and white collar crime to insurance fraud, criminal investigations and undercover operations.

Earle is also a certified Kyokushinkai Karate Branch Chief and martial arts instructor and well versed in the handling of weaponry. These experiences combined with his Marine Corp and equestrian experiences have resulted in a number of short stories which in turn led to his first novel, Said The Spider. He recently completed a second novel, Gumshoe Diary, The Month of May.