Romance With A Touch of Love 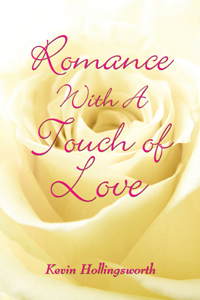 Romance With A Touch of Love

Her Name Was Lovely: Her body was not perfect, but a sculpted delicacy. Beauty covered her entire frame with no doubt. Autumn's desire she was indeed. Summer and fall could not forget her. Her beauty resonated in winter especially. I loved her so, but she never knew.

Kevin Hollingsworth started writing later in his life just for fun in his spare time. He received some positive feedback on his writing from friends, acquaintances and family. He continued to write in his free time because he enjoyed it and he liked putting smiles on people's faces; which was not an uncommon reaction after someone read a humble literary creation of his. As simple as it sounds, Kevin guesses people will never know they may have an aptitude for something unless they try it. If Kevin's writing can bring a sparkle of joy, or happiness to someone's life; if his writing can touch people in a meaningful way, then he knows at least he can feel good that he has done something right in this life for a moment in time..