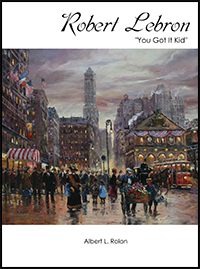 Robert Lebron is an accomplished twentieth century impressionist painter from New York City. He began his journey with art when he was four years old and continued to evolve until his final days. This evolution shaped the artist and author into a modern day Renaissance man. Robert Lebron is best known for his depictions of New York City utilizing only the palette knife in lieu of a brush. However his catalogue is more diverse in subject matter including other iconic cities like Paris, London and Amsterdam as well as fanciful paintings with Mark Twain, Don Quixote, and Humphrey Bogart to name a few. No matter the subject he depicted, Robert Lebron was a master at enticing the viewer with his ability to convey a story on a canvas. This book explores his life’s journey to develop his style and the desire to become a notable painter of the twentieth century. The biography included in this book describes his early education in art, his worldly travels, and the prominent people in his life. The remainder of the book is dedicated to providing examples of Robert Lebron’s artwork including paintings from the 1960’s up until his death.