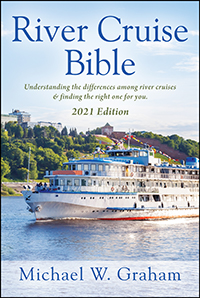 This is your guide to finding the river cruise that is exactly right for you. From Europe to Asia to the USA, there are many different cruise lines, often with vastly different pricing. The River Cruise Bible gives comprehensive comparisons between the major river cruise lines and explains what they share in common and how they differ. Arm yourself with this book to save money and ensure the best experience when booking your cruise. You will find out how to navigate tricky advertising gimmicks, which is the best river, how to properly book a river cruise, mobility options—and you’ll learn the eleven must-ask questions. Not only will this book help you spend your hard-earned savings wisely, it will help you find the right fit and experience for your particular needs. You don’t want to be on the wrong cruise in the wrong cabin on the wrong river—that’s the opposite of a vacation, and you don’t want an unhappy travel companion! Instead, pick up valuable insights from the River Cruise Bible, and book the RIGHT cruise. After your return, your friends will love hearing stories of the life-changing moments you encountered. You will smile as you realize that your amazing adventure was worth every single penny, and that you have spent your time wisely as well. Back home, bonds created during your shared river cruise experience have made life better than ever.


“Dreaming of the perfect trip and executing the perfect trip are two very, very different things. With this book, Michael Graham has distilled decades of experience to help his readers become not only well-prepared river cruisers, but exuberant, joyful travelers regardless of their method. It's a thoughtful, unbelievably detailed labor of love from one of the most diligent, professional and genuinely kind people I know. Before you take your first river cruise, or your 20th... you should read this book."


Cabin type or cabin category is an important factor in deciding on which river cruise line is for you.   All claim to have the best cabins of course, and there is quite a bit of innovation among the different companies.  Even if you have decided on which line, there can be quite a cost & experiential difference depending on the cabin category you select.
Common types of cabin categories on riverships:

Innovative cabin designsThe president of Amawaterways, Rudi Schreiner, is one of the first to implement the French balcony.  Obviously this has been a game changer by increasing indoor usable space yet by opening the door you can enjoy fresh air and watch the world go by.  Rudi has been awarded CLIA’s Lifetime Achievement Award (CLIA is Cruise Line International Association).  Another first he also introduced were “Twin Balcony” staterooms  that have one french balcony and another standard exterior balcony.  Amawaterways was the first to offer connecting staterooms on select ships, which are family friendly for certain sailings. See the section Bringing Kids on a River Cruise.
Let’s move on to the most well-known river cruise company to the US market, with the largest number of ships by far, Viking Cruises. Chairman Torstein Hagen has been instrumental in the growth of river cruising, and through creative and persistent marketing has really created a huge interest in the entire market.
Viking patented an “offset” deck plan, and it is certainly an innovation for Viking, though the prospective guest should be aware of it when considering cabin category.  More specifically, most river cruise ships have a hallway that is centered on the ship, with more or less equal width cabins along the corridor.  On a Viking Longship, that is not the case; the corridor is offset by a few feet giving more room to cabins on the port side of the ship than those on the starboard side.

Viking French balcony cabins are always on this shorter side, and the Veranda Staterooms are on the wider side of the ship.  This is really smart as the drawback of outdoor balconies is that it typically takes away from the rest of the cabin space.  On Viking it instead takes the space away from the neighbors cabin across the hall!

The result is that the Veranda Staterooms are 205 sq feet (interior), and French Balconies are 135 sq feet.   That may not sound like a lot of difference, but 135 sq feet is really a very small amount of room for two people to live- especially on cruises longer than a week.  Remember that these figures are for the total cabin, to include the bathroom, bed, and “living” space.  By comparison  the lead-in “Standard River View” cabins are billed as 150 sq feet on Viking River Cruises.

If Amawaterways invented the french balcony, Avalon Waterways re-invented it.   On their new class of “Suite Ships,” they have done an amazing job of re-inventing cabin layout and maximized the opening size of french balconies.  Remember these are giant floor to ceiling windows when closed!


Avalon Waterways has really done a nice job on re-imagining the french balcony stateroom, and on their “suite ships,” 80% of the cabins are like this (Categories A,B, P).   Instead of a double door system, they have triple doors that are floor to ceiling glass, and they open up to 8’ - quite wide for a french balcony.   There is a nice sitting area right beside the opening to enjoy the space.  The more I looked around the room, I began to realize how much thought and engineering was put into this design.   The bathrooms are built with an angled wall, making them more spacious, and that angled wall (on the other side) is where the head of the bed is, facing the french balcony doors and the view, which is lovely.  (Note that Tauck in many categories also has the bed facing the view).  The TV is on a wall mount in the corner (out of the way) and then the vanity/desk/wardrobe combo makes organizing the next week or so a snap.   In the end it feels spacious, luxurious, and the best view of any balcony stateroom.

An early adopter of the infinite balcony is Emerald Waterways, which is another way to maximize your view.  Although it is not as wide as the Avalon triple door, it doesn’t have a door at all!  That means no railing, which enhances the vistas along the river.  It’s a floor to ceiling wall of glass, composed of 2 windows.  Simply hold the button to raise or lower the top window to your desired position.  At the lowest position, it’s about railing height, and you can enjoy the fresh air from your stateroom.
Again, any type of french balcony combined with a standard sized stateroom really maximizes living space without compromising what people really like about a balcony: a sitting area with fresh air and a great view!
Tauck Lofts - This is the one lower deck cabin I can definitely recommend!  This Category 3 on Inspiration Class riverships (ms Grace, ms Inspire, ms Joy, ms Savor) gives you a french balcony for the price of a lead-in “below the waterline” cabin.


In this category, the bedroom and bathroom are on the lower part of the cabin and instead of a small window at the top of the room, there is a seating area with a floor to ceiling window.  The top half of the window then lowers into an “infinite” french balcony.  Note that this would not likely be a good selection for those with mobility needs.

U by Uniworld has a few cabins that are made for triples, with the idea of friends traveling together.  Each of the three “pods” has its own flatscreen, bluetooth speakers, and safe.   These two ships “The A” and “The B” have a much different decor than most riverships, including the upbeat and lively cabin colors.

So let me say it again - on virtually every other cruise line, the French / Infinity Balcony is usually the best bet because you reclaim that outdoor space as much needed interior space, but not on Viking.  On Viking you want to get the Veranda Stateroom - not necessarily for the balcony itself, but for the extra interior space.


Cocktail Hour Trivia: On Viking Longships, it should be noted that along with the French Balconies on the “short” side are the Veranda Suites.  Because these take up the size of two French Balcony Cabins, they are 275 square feet with a separate living space and have 2 french balconies.  These are a nice upgrade from the Veranda Staterooms!

Michael Graham is the President of MGA Travel in Myrtle Beach, South Carolina. He is a father, speaker, travel investment advisor, and author who gives travel talks around the country at consumer, trade, and corporate events. Michael and his wife Kelly are avid travelers, having visited over 70 countries, all 7 continents, and hundreds of cities. Michael believes that river cruising is one of the best ways to see the world, and his unique expertise comes from having sailed on nearly all of the various cruise lines himself, and from booking millions of dollars of river cruises for his clients. Michael firmly believes that travel is a way for people to open up and connect to one another, supporting world peace and harmony.