The Life and Times of the Reverend Rebel Rich

And Grace Shall Guide Me Home 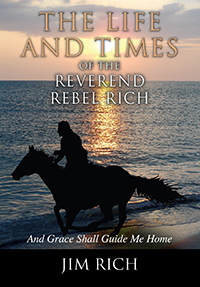 The Life and Times of the Reverend Rebel Rich

And Grace Shall Guide Me Home

What others have said: “Dr. Rich always strives to bring out the best in those lives he touches. Here, he relates further his life and times of doing just that. I count myself as being one of the lucky ones to have crossed his path.” —Jan Thomure “Jim Rich is one of the biggest inspirations in my life as an educator. At a time when I was trying to find my way, he took me under his wing and helped me believe in myself. I saw his passion for kids, his desire to make a difference, and his commitment to never stop growing. Jim was always trying to make things better for others. He poured his life into students, teachers, and everyone connected to the school. He showed me the ropes and helped launch my next chapter as a school administrator. I am thrilled he is sharing the wisdom and the stories from his years of leadership and service. Everyone interested in education will benefit from his remarkable experiences.” —Dr. David Geurin, Author of “Future Driven” “The man, the myth, the Gum Theorist: Dr. Rich writes a poignant memoir that follows him on his journey of positivity and giving back to his community.” —The Moore Family: Roger, Dawn, Kyle, and Cameron “Dr. Rich has devoted most of his life taking action and giving his best shot in doing whatever he could to help kids succeed in school and in their futures! In working with him for a number of years, his love for kids was readily evident in his drive for always doing what was best for them!” —Dr. Mike Wutke “Dr. Rich always set and held to high standards not only as a teacher and an administrator but also as a citizen. His story is one of dedication, passion, and hope. He is a man rich in generosity, integrity, kindness, patience, and an unsurpassable compassion to see young people succeed!” —Sue Storment “I had the distinct privilege of not only working with Dr. Rich for a number of years but also being able to call him a friend. I can honestly say that he had such a great impact on my career as a high school administrator and I do not think anyone could even fathom how many kids’ lives he has affected in a positive way. His positive approach to education and life is so uplifting and he is a role model we should all follow. I cannot begin to thank him for all he has done for me personally and for the kids in Missouri!” —Randy Luebbert

Jim Rich is a life-long learner, student and teacher, and has been a coach, pizza and taco maker, restaurant owner, educational administrator, after-school specialist, Executive Producer of two rock and roll albums, advisor, counselor, shopper, insurance claims adjustor, carpet buyer, sporting goods warehouse manager, investor, Santa Claus, U. S. Army Veteran, fence builder, worker, carpenter, substitute teacher, roofer, salesman, defensive end, 4x100 relay track member, shortstop, second baseman, educational consultant and now, finally, an author. He lives in the southwest Missouri Ozarks with his soulmate, who is also his wife, Nancy, and their long-time puppy “Diamond”. He spends time in the Ozarks, at the cabin on the Lake of the Ozarks, traveling, and in Florida during the winter. He has visited all of the major league baseball parks, and he attends the Super Bowl every eleven years. He has been to every major sporting event finals except the NHL Stanley Cup finals, which remains on his to-do list, along with a hopefully not too distant in the future trip to the Fiji Islands, New Zealand, and Australia. Dr. Rich attended Southwest Missouri State for his Bachelor of Science in Education, Masters in Administration, and Specialist in Administration degrees. He attended the University of Missouri for his Ph.D. in Educational Administration. He continues to strive to positively impact others by the way he lives, learns, and teaches.