A healing journey through your "Innerverse" 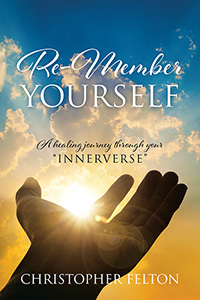 A healing journey through your "Innerverse"

Re-Member Yourself is a comprehensive self-help workbook/journal that can be understood and applied by people from all walks of life. This book is very unique in that it is interactive, progressive, and metamorphosizes into a literary, improved version of YOU. The Journal section, alone, is like no other journal you’ve ever had, as it is specifically formatted to help you learn from and correct negative thinking, bring meaning to your daily life, helps you to find a purpose in each day, and even prepares you to optimize tomorrow. POWERFUL! The time for this type of book has come, and NO WHERE ELSE will you find a book of this kind! Does any of this describe you: * You tend to be depressed and/or pessimistic, but don’t know why? * Your life feels meaningless & without purpose, and you want clarification? * You simply need more order and balance in your life, but can’t seem to get it together? If so, then you need “Re-Member Yourself” TODAY!

Christopher Felton is a prolific Public Speaker, dynamic Writer, and competent Educator who has expansively taught about world Religions, Eastern philosophies, and Humanism. Christopher is hyper-creative and is best known for his extraordinary writing abilities, as he is able to transfer thoughts and reality onto paper. The author of two debut books, “Cipher’s Den” and “Remember Yourself” had been featured in “Her Times” magazine publication, which quickly revealed that his books and articles are embraced by readers of varied backgrounds. His articles have been broadcasted by a prison administrator as ‘inspirational’, his second book was reviewed by a Clinical Therapist as ‘working great for her patients’, and a celebrity figure sent him a letter of commendation and admiration for his ‘exceptional writing and thinking skills’. Christopher is a former Maryland State Trooper who was an expert sharpshooter. He was certified in pressure points tactics, control tactics, and defensive tactics. The renowned writer and public speaker is best known for utilizing his extraordinary and hyper-creative technique to captivate his readers, and summoning complete attention from the audience during his public speeches. He is a writer who bleeds his passion and breathes his truth. He is also a multi-talented personality who believes in projecting optimum effort in everything he does. However, with all of Christopher’s achievements, what he treasures most are the sentiments and tributes he has received from family, friends and colleagues – with the most notable being an essay written about him by his youngest son.