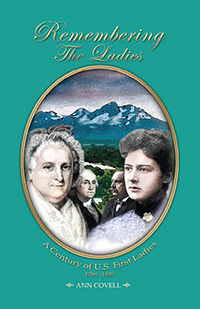 THE FIRST LADIES OF THE 19TH CENTURY

Michelle Obama, Jackie Kennedy, Mamie Eisenhower—these are just a few of the 20th-century wives of American presidents who have been immortalized under the blazing spotlight of public scrutiny and media coverage. But go back a hundred years to the First Ladies of the 19th century, and we find a group of women who have often been overlooked—and not because their contributions were less or their lives less colorful.

“In an era with few national newspapers and journals, and with photography in its infancy, it was the President whose picture hung in towns and cities throughout the land… The First Lady was rarely seen outside the capital and remained almost unknown to the nation’s citizens until the latter part of the century.”

Remembering the Ladies will bring these extraordinary women from the first hundred years of the American presidency to life. It’s an insightful peek into the personal and political lives of this group of First Ladies, many of whom were burdened by more than their fair share of misfortune—and some who were nearly forgotten. These are women who were thrust into a political arena that was not always receptive or supportive. Their tales involve slavery, bigamy, duels, royal snubs, wars, assassinations, and suffrage. First and foremost, however, the First Ladies of the 19th century were loyal and dedicated citizens, wives, and mothers, whose stories deserve to be told.

About the Author: Ann Covell and her husband, a dental surgeon, visit the United States several times a year and divide the rest of their time between their homes in the UK and Spain. Ann has had an extensive career in health service management and has served as a Justice of the Peace in the UK for many years. Currently the editor of a magazine for the Costa del Sol Decorative and Fine Arts Society in Southern Spain, Ann has also written for a number of regional magazines and local newspapers in the UK, as well as published several articles in various health service journals. Remembering the Ladies is her first book.