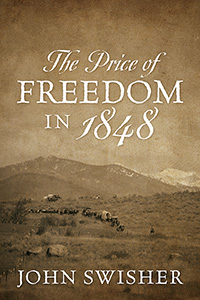 Upon his death, John Warwick, a Quaker in Lynchburg, Virginia, freed his seventy-five slaves. Virginia law required that freed people had to be moved to a free state and supplied for one year. This law was designed to discourage freeing slaves. Warwick was buried in an unmarked grave to protect his remains from protesting whites. I learned about this story when a descendant of one of the freed people came to my daughter’s farmhouse that had been built on the foundation of the Warwick plantation.

The new Virginia turnpike was the route followed by their wagon train toward Indiana, the state named in the will. The people were constantly confronted with questions about who they were and where they were going.

Their journey was difficult in the winter in the mountains of what now is West Virginia. Slave catchers followed them with the intent to capture some of the people to sell them back into slavery. When they got to Ohio, they faced a tax of five hundred dollars each.

Could they help runaway slaves find a station on the Underground Railroad? The free people had to decide whether to trek on to Indiana and face pending antiblack immigration legislation or settle in Ohio.

The executor bought a large parcel of land in John Warwick’s name on the southwest corner of Indian Lake, Ohio. What would happen when the lake was raised? They were told that blacks had no standing in court to challenge the action. How many of the new community died from malaria? A school was started under separate but equal laws. A wonderful first official marriage recognized by Ohio was celebrated. Were black soldiers treated the same as white soldiers in the Civil War?

John Swisher earned his doctorate in Counselor Education in 1967 from Ohio State University. He had been a science teacher and school counselor before obtaining his doctorate. He taught at Temple University for two years before finding a home at Penn State University. During his academic career, he authored one hundred articles and book chapters and three academic books. After thirty years of teaching and research, he is now an emeritus professor of education. He studied creative writing through several courses offered at Chautauqua. A writing coach, Vicki Entreken, provided invaluable assistance in the production of this novel. Two previous historical fiction novels were based on real historical events in Greece and included a contemporary mystery overlay. The Price of Freedom is a historical fiction novel that begins in 1848 and ends in 1863. The story is based on actual events. It reveals the deep roots of prejudice and the costs of freedom that the seventy-five freed people paid.