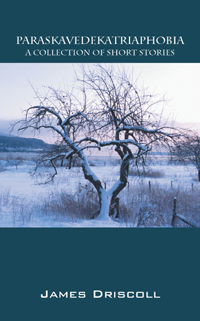 Not everything is what it first seems to be.

"Paraskavedekatriaphobia, A Collection of Short Stories" takes you to surprising, unexpected places. In this collection of short tales, author James Driscoll spins riveting short stories that revolve around shocking incidents, each one wending its way to unanticipated conclusions. Like literary optical illusions, Driscoll's tales trick the mind's eye with clever plot twists and focus shifts with O.Henry style endings.

Stanley suddenly awoke. It was dark in the living room, dark outside. He thought he heard a noise coming from the kitchen. He reached over for the lamp on the table and turned it on. He saw five empty beer cans on the table and two on the floor. He looked at his wristwatch and saw 12:00 a.m.. He heard a noise again, but this time it sounded like it came from the dining room. It must be that damn cat, he thought. He rubbed the sides of his head, trying to clear his mind. Suddenly, he saw a shadow to his right. It was difficult to see. He blinked his eyes and spoke. "Who's there? Who...what are you?" As Stanley struggled to get up, he heard a tremendous bang and felt the center of his chest explode as the force of the bullet propelled him back into his favorite chair.

James Driscoll has a B.A. in Political Science from the University of Massachusetts, and is working on his Masters in English and Creative Writing at Southern New Hampshire University and other books for publication. Originally from Boston, he moved to Quincy, MA, in 1981. 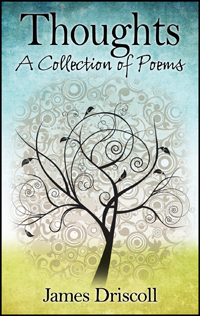