Odyssey of a DP

Memoirs of a Displaced person 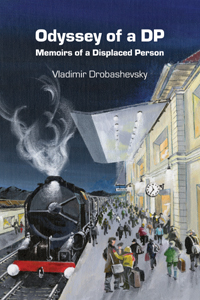 Odyssey of a DP

Memoirs of a Displaced person

From displaced person to award winning designer: the memoirs of Vladimir Drobashevsky.

In 1941, twelve year old Vladimir awakes one morning to the chaos of the Luftwaffe bombing his neighborhood in Belgrade. The Germans are invading his homeland. Vladimir and his family are soon suffering hunger and deprivation from the German occupation as well as daily air raids by the Allies. His parents reluctantly decide it will be best if Vladimir and his mother leave his father behind to defend Yugoslavia and fight the now advancing Soviet Army while they flee to Austria. Finally the family is re-united in an Austrian refugee camp and ultimately they are able to immigrate to America after the war. For the next forty years Vladimir designs national and international expositions – including several Nuclear Information Centers in the U.S. and Asia — and receives numerous awards for his work in design and graphic arts. One night, after Vladimir has received a phone call in his hotel room that his father has died from a heart attack, he realizes that he never took the time to listen to his father’s stories about World War I, the Russian Revolution or his father’s battles against the Communists in his native land. Like his father, Vladimir, too, is a wealth of unique historical information about an important period in the history of the world. Odyssey of a DP is his contribution to preserving those stories and paying tribute to his lineage and his family.

Highly respected designer Vladimir Drobashevsky was born in Belgrade, Yugoslavia, in 1929. He immigrated to America in 1949, served in the U.S. Army during the Korean War and then earned a B.S. degree in Industrial Design. He enjoys caring for his wife and life partner of fifty-six years, Elfrieda, who serves as a remarkable example of perseverance and positive attitude to all who know her. They have one surviving child, their daughter Elizabeth. Besides the wide recognition for his commercial work, Vladimir has also received an award for his chestnut-carved iconostas design at his church in Allison Park, Pennsylvania.