Noah and His Rainbow Friends 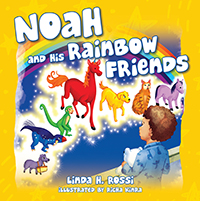 Noah and His Rainbow Friends

Fanciful story of a boy's imagination and his Rainbow animal friends!

Noah is an active little boy, who loves animals, but finds himself very lonely with no brothers or sisters. He has a very vivid imagination. His teddy bear, Polo, is his constant companion. He loves going to his Uncle Robert’s veterinary office, but one day he doesn’t go because he is sick. That night Noah’s illness, his fever and imagination all work together to bring a magnificent rainbow and a collection of colorful animal friends to life right before his eyes! A magic “Special Key” and keyhole, visible only to the boy, help assist him in summoning the animals to his window. His mom doesn’t believe the animals visited him, but how do you explain the silver stars and red hearts that mysteriously appear now on his bedroom floor? Noah’s animal friends appear to him more than once throughout the story to help overcome his loneliness, help make him feel better and help solve his “Show and Tell” problem. Each of the animals is represented by the colors of the rainbow. There is a red Unicorn, orange Main Coon Cat, yellow Labrador retriever dog, green spider monkey, blue parrot dinosaur, indigo lamb and a violet pony. The whimsical illustrations together with Noah’s brilliant imagination and his love of animals all come to light in this fanciful story. But we are left wondering if it really is Noah’s imagination or if his rainbow animal friends are real and whether they will come again at a later time for more adventures.

Linda H. Rossi is new to book writing. Her lifelong career in marketing, advertising and public relations writing has easily lead her to become an author. She was named Marketing Woman of the Month by Arizona Woman magazine. She holds a BSBM degree from the University of Phoenix.