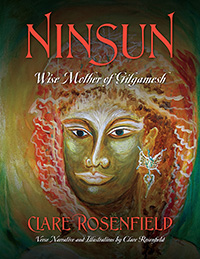 How a wise mother’s story of meeting huge physical and emotional challenges with dignity and courage awakens her son, King Gilgamesh, to what is true, real, and lasting.

This dramatic verse is a riveting sequel to the ancient Sumerian epic of Gilgamesh. As king of Uruq, Gilgamesh comes to realize that it was his own hubris which precipitated the death of his best and only friend, Enkidu, whom his wise mother had predicted he would meet. After having lost the elixir of immortality he had journeyed so far to obtain, in Ninsun, he returns to his kingdom, bedraggled and unrecognizable, but in need of his mother. How did she become so wise? At his request, she recounts to him the story of her own daring choices and unusual destiny, one which transforms her son into a new kind of leader, humble, kind and self-reflective, with a deep positive regard and love for his mother. Ninsun’s story tells how she faced extreme adversity with divine magnificence, wisdom, and strength, offering a model for us all in our own challenging times.

"A multi-dimensional being am I and so akin to godliness that I can hear your heartbeat. I have followed your journey into grief...and there is no tear that you have shed that has not wet my heart. I am with you, O King, and I am at the same time in the Allness and Oneness."