Where Do These People Come From? 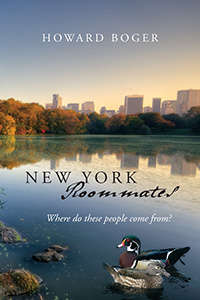 Where Do These People Come From?

What’s the difference between women looking for an apartment in New York City and wild animals roaming the wilderness? Nothing. Absolutely nothing.

Hank has had nothing but bad luck when it comes to sharing an apartment in the City. After his last male roommate put the moves on him, Hank is determined never to share space with a man again. So he places an ad in the Village Voice for a new roommate—straightforward and to the point: Female wanted to share apartment with musician/photographer. No males allowed! He expects the usual parade of weirdos, but what he gets is much more than he bargained for. New York Roommates is a wild and entertaining romp through midtown New York and the characters who live there—welcome to the jungle!

Howard Boger is a former urban planner and community developer, drug counselor, legal proofreader, and paralegal. He is also an accomplished musician and photographer in New York.