Nectar of the Gods 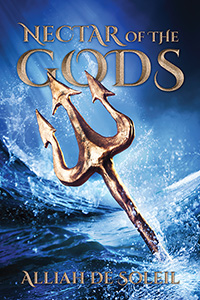 Nectar of the Gods

From the Doomed Kingdom of Atlantis, an Immortal Arises

King Eumelus, the ruler of Atlantis and descendant of Poseidon, has a terrible secret that could ruin his empire. Only two people know the truth about his son Marcus, the talented and intelligent crown prince born late in Eumelus’ reign. But there are secrets and prophecies even deeper and more mysterious than the one King Eumelus conceals. On his twenty-fifth birthday, Marcus makes the traditional journey to hear the words of the oracle, who will reveal his destiny. The words she speaks will shake the foundation of all Atlantis, as she tells him of love that will span many lifetimes, a lineage of powerful sons, and a calling that will put him on the same footing as the gods. As he leaves the oracle’s cave, Marcus begins the journey that will bring him both unimaginable joy and unbearable tragedy, a fate that will change Atlantis forever…and which will make him immortal. Beautifully imagined, richly characterized, and deeply felt, The Nectar of the Gods is a fascinating epic that considers an old legend from a unique viewpoint.

Alliah de Soleil is first and foremost an artist. A lifelong New Englander and mother of two, she currently lives in southern New Hampshire. Nectar of the Gods is her first novel.