Kidnapping the Image of God 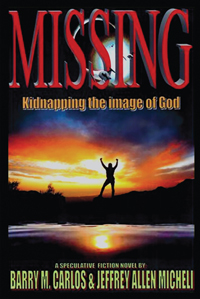 Kidnapping the Image of God

What would you do if you came upon a book that revealed the solution to a centuries old mystery? What if the answer was so fantastic as to be almost unbelievable? Would you have the courage to act on this information knowing that your own life would be in immediate danger?

Kenny Wagner, a bookstore owner in New Orleans faces just such a dilemma when a stranger unexpectedly hands him ‘The Crossing’. This book chronicles the history and true nature of the inhabitants

Of the so-called ‘Planet X’ and their ever-present covert

relationship to the human race on earth.

'MISSING Kidnapping the Image of God', captures the reader’s forgotten memories, creating an inseparable link to Wagner as he is thrust into a mysterious journey that spans and intersects both space and time. Coming full circle, the journey leads to a startling conclusion… Is the year 2012 the end of humanity,

As before, the shadow adjoining the individual does not allow Daryl a clear view of his nemesis facial features. Yet, there is some recognizable presence that surrounds both this individual and the entity he first saw in the Church Doorway and then again standing in the bookstore’s parking lot. Now, his presence alone causes uncontrolled panic to violently jolt Daryl back into his seat. His heart pounds harder and harder and he begins discharging air faster than what he can take in as the metallic sound of footsteps advances up the plane’s stairway. He tries frantically to bolt from his seat, but he cannot move. The unstoppable sound of the door slamming shut now echoes down the aisle. Daryl instinctively closes his eyes, not wanting to see what might be in store for him.

The reverberations quickly dissipate into a vacuum that for the moment only allow Daryl’s pounding heartbeat into its deadly silence. Daryl can feel the closeness of the ‘unbelievable’ before him and the last strand of his sanity fights to keep from looking. Suddenly, without warning, powerful fingers press hard against his tightened eyelids, forcing them to open and behold his childhood nightmare. All the stored up, bizarre and fanciful pictures of the evil one immediately vanish from Daryl’s mind as Lucifer leans closer into his face and asks…“Do you know who I am?”

In the 1970’s, Barry Carlos needed a first rate trumpet player for his new Rock Band - Lexington. He received the names of twenty players from the Musicians union and for some unknown reason began calling them from the bottom of the list to the top. You guessed it; Jeff Micheli’s name was the last one on the list and the first one to audition. After Barry heard Jeff play, he cancelled all other auditions.

There began a close friendship that has spanned over three decades. During their years of touring with the band, they would spend hours after the gig drinking several cups of ‘Joe’ at the local coffee shop with their fellow musician, Mike ‘The Boneman’ Mirko, discussing the possibility of UFO’s and Aliens, the Spirituality of man and of course… music.

In 1998, Barry took a college writing class and for his final paper wrote a short story on the subject matter of this book. In the summer of that same year, he took the idea to Jeff and the two agreed to write the complete story. In 2009, after years of research, writing and editing, they felt that the first of two books on the subject was ready for publication.