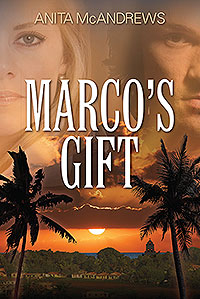 Elizabeth Rogers, an elegant blonde and successful art dealer from Boston, arrives on Taboga Island in the Bay of Panama, intent on finding the lost paintings of the painter Paul Gauguin. From her research and from his own journal writings, Elizabeth is certain that Gauguin, suffering from malaria, had painted while hospitalized at the island sanitarium. Rumors on the island circulate about these mysterious hidden paintings. The island is caught up in its past, suffering from poverty and superstition, in a country oppressed by both church and state. The island’s local leader, Marco Rodriguez, cares deeply for his people. Although he has no official title, the islanders know him as the Devil Man—a dark, powerful figure from Panamanian legend. Marco is a third generation Devil Man, having inherited his “stone” from his father. Accepting the “stone,” he has made a pact with the Devil. Embedded in his arm is a small religious artifact known as the Devil Stone. Being a well-educated man, Marco is torn by opposing worlds, and is secretly uncertain of the alleged power of his “stone”. But who would he be without it? This is his terror. When Elizabeth and Marco inevitably meet, their worlds collide; their encounter is fraught with mutual distrust and attraction. A powerful tale of a doomed but irresistible love affair, they take chances, they make promises, and in their union is redemption. 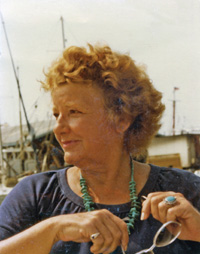 Anita McAndrews lived in the Republic of Panama for over 30 years, raising a family while pursuing a career as a journalist, novelist, poet and painter. Her numerous writings reflect her fascination for the diverse influences affecting people’s lives. In each of her works, Anita weaves a tapestry of powerful personalities intertwined with modern or historical backdrops. The reader is drawn in by the personal passions, the risky adventures, or the fantastic circumstances in each story’s compellingly rich and visual landscape—making it difficult to put her books down. Also by Anita McAndrews: Cuna Cosmology, Conquistador’s Lady, The Photograph Upstairs, Catwalk, La Pampa.