Losing Ike to God and How God Comforted Us 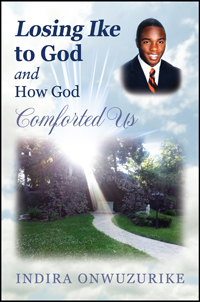 Losing Ike to God and How God Comforted Us

Who you are and who you become depends on who you love.

The greatest nightmare a parent faces is the loss of a child. On June 17, 2014, this nightmare became a reality for the Onwuzurike family when their oldest son, Ike, drowned while hanging out with friends. The 18-year-old had just graduated from an all-boys Catholic high school and was on his way to Washington University in St Louis on a full-ride scholarship to study pre-med. Ike lived a life of dedication to God and service to others, putting God first at all times, and he touched many lives in his short time on Earth. Ike’s family found comfort in the fact that Ike was able to live for God by really getting to know who God is, by spending time with Him in prayer and reading His Word. They knew it was impossible to love someone if you didn’t know who that person was, and Ike’s love for God was genuine and heartfelt. Some losses are unimaginable, but Losing Ike to God and How God Comforted Us reminds us that with the grace of God and His healing, even the unthinkable loss of a child can be overcome.