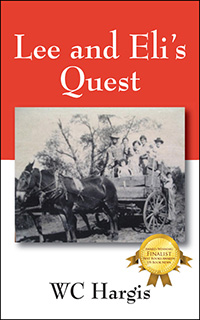 The westward movement was a magnet for the down trodden, a young boy escaping the manacles of a dirt farm in Missouri, and a slave escaping from a plantation in Louisiana. The two exhibit unusual courage and resourcefulness as they mature. Lee, a strapping nineteen year old boy in post war Missouri, leaves home with nothing but the clothes on his back and the pistol he stole from his step father. Eli Delacroix, raised in a small cabin on the edge of a swamp in Louisiana, spent his time hunting and fishing with an old Indian friend named Poppy. Eli was nineteen and fair of skin, with brown hair bleached blonde from the sun. Eli's eyes came open. He wasn't sure what woke him up, maybe it was nothing. But as he started to doze back off, he heard it again. It was a long way off, but it put a fear in him like he never had before, and he knew that the sound of those hounds meant they were on his trail again. Eli was really tired, but he knew he couldn't stay here; he had to run for his life now.

Stump drove the carriage through the narrow streets until he came to a little house with a garden that needed tending. Eli’s knock on the door was soon answered by a large black lady. She said “Can I help you sir?” Eli replied, “I’m looking for an Angela Delacroix.” The large black woman ask him, “why you want gramma?” Eli said “I need to ask her some questions about someone.” The lady was reluctant, but finally let Eli in the door and led him across the room to an old woman sitting in a rocking chair. Eli was holding his emotions in check, as he ask, “Are you Angela Delacroix?” The old woman said, “Yes, who wants to know?” Eli noticed she spoke with a refined voice and she must have had just a drop of Negro blood. He replied, “my name is Eli Delacroix, and my mothers name was Maria Delacroix.” Angela put out her shaking hands and said, “Give me your hand boy.” Eli took her hand in his good hand, but she took hold of both his, feeling all over them, examining his hand with the missing fingers also. Then she pulled him down to his knees in front of her. She took her hands and felt of his face as only a blind person can do. Finally she said, “you have her features. Maria was my daughter, so you must be my grandson.” Tears were rolling down Eli’s cheeks, and she rubbed them away with her hands, and pulling him to her, kissed away his tears. Her tears were running down her cheeks. When both their emotions were under control, Angela said, “tell me about Maria. I haven’t seen her since she was fifteen years old and was taken away from me. She was so beautiful.” Eli told her about the cabin they lived in by the swamp and how she taught him how to read and do all kinds mathematics, about the funeral and all of her friends that came. His heart cried out in anguish as he told his grandmother how much he missed her.” Angela said, “I was fortunate to be owned by a family who sent me away to college with their daughter to be her maid, and she taught me everything she learned at that school. When we came home after all those years of study, I was extremely educated. Her brother was a ships captain who sailed everywhere, and he fathered your mother. I like to think that he loved me, but I was young and a slave. The family came on hard times, so they sold Maria to the governor. She was so scared, but there was nothing I could do but cry. Eli I am so glad you came here and told me about my baby. Now I can die in peace.” 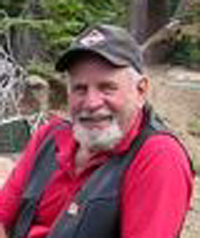 WC Hargis is a retired ironworker living in Clearlake, California, who is now working on his next novel. https://outskirtspress.com/leeandelisquest