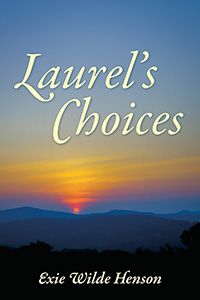 Will Laurel Worth be able to survive the alien environment into which she and her young family have moved?

Will Laurel Worth~and her marriage~survive the primitive, dangerous environment into which her husband, Justin, has moved the family? Laurel's early experiences in her new home - a two-room, thrown-together logging shack - include the near-fatal rescue of her young child from a rushing river; quarantining herself with a little girl with diphtheria; Justin's kidnapping by moonshiners and a near-death encounter with outlaws. Laurel, the daughter of an esteemed professor, has been a public figure most of her adult life as a well-known speaker for social issues such as women's right to vote. She is also a successful teacher with nurse training. Justin, college educated and already an accomplished, sought-after professional photographer, is an adventurer at heart.. Because of his background and his love for the forest, he impulsively takes a job supervising a logging camp in the remote mountains of western North Carolina. Will their true love for each other stand the test? Will Laurel's faith sustain and empower her? Will Justin overcome his fear of God and come to trust Him? Will they survive? The challenges demand choices. What choices will Laurel make? Set against the background of intriguing national and international historical events from the 1920s through the 1940s, this resolute, patriotic book showcases the indomitable American spirit . . . and the powerful truth that it is not our circumstances but our choices, empowered by God's adequacy, that determine who we become.

Justin was riding Tattoo home from town one Friday afternoon in autumn, enjoying being in the woods on his horse again. The Model-T and dusty roads saved time but couldn't compare with the enjoyment he felt with Tattoo's companionship. As he rounded a curve between two high banks, two masked men on horses faced him with pistols leveled. They were dirty and tattered. Their stance was tense. Justin knew these were the outlaws he had been warned about. His gut clenched as he drew Tattoo to a stop. "Hand over your payroll," one demanded. "Not even a 'howdy,' just orders," Justin said. "I said we want your payroll," "I don't have a payroll. My men go to Deerbrook to get paid." "You're lyin'." "Search me and see." They moved in on him, one on each side to search the saddlebags and his pockets. They kept the few dollars they found in his billfold. As the man on his right straightened up, his kerchief fell off his face down around his neck. Justin recognized a face he had seen on wanted posters all over town - Bill "Bandit" Butler had robbed and killed his way through three states. "Well," Butler drawled, "that's bad luck for you. You know we'll have to kill you now." His cold eyes looked at Justin as he lifted his pistol a few inches from Justin;s chest. Before Justin could react, a familiar voice on the bank said, "Drop your guns, both of you!" The outlaws looked around but held on to their pistols. "We've got two shot guns and two rifles aimed at you! Show 'em, boys!" Four masked men moved to the edge of the bank, their gun barrels pointed. The outlaws' pistols thudded to the ground. "Now listen to me good! This man and his family are friends of our'n. You touch 'em again and we'll hunt you down. We know exactly which cave you're holin' up in! Now git out!" The outlaws galloped away and one of Abner's men picked up their pistols. Abner jumped off the bank and held his hand up to help Justin dismount. Justin mopped his face with relief. "I would;ve met the undertaker if you hadn't happened by - or did you know . . . ?" ""We heard they was plannin' to jump you. The rest was guesswork. The Good Lord was not ready for you yet." "Thank you. I owe you!" "No," Abner said. "We still owe you one life. Your wife saved my wife and my son."

Exie Wilde Henson is an educator, conference speaker and author. She grew up in the mountains of North Carolina, the setting of her book. She, her minister husband, Gene, and their three children have traveled, lived and worked internationally in numerous places. The author now lives in upstate South Carolina. Originally published as a book and a sequel, Laurel’s Choices has now been revised and condensed into one enthralling novel! The low sales record and reviews is because the author was unable to market Laurel's Choices. She chose to be beside her husband daily as he traveled through the latter stages of Alzheimer's until the journey's end. She had no time or energy to pursue other goals. She is now starting to market her book.