The True Story of a Marine Rifleman’s Tour from the Intense Fighting in Vietnam to the Superficial Pageantry of Washington, DC 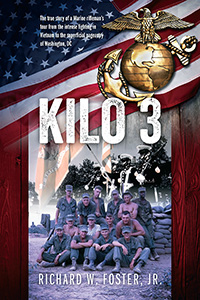 The True Story of a Marine Rifleman’s Tour from the Intense Fighting in Vietnam to the Superficial Pageantry of Washington, DC

This is the true story of a 17-year-old kid who quit high school in his junior year to join the Marines. After a short cruise with the 6th Fleet in the Mediterranean, he was assigned to a rifle company in Vietnam during the heaviest fighting of the war in 1967 and 1968. He went to Vietnam eager to save the world from Communism, only to become disillusioned by the lack of progress in the field, and mentally exhausted from the intensity of the ground combat. Returning in shock from what he had seen and done, he was assigned to the most prestigious Marine ceremonial detachment in the world: the Special Ceremonial Platoon located at the oldest post of the Corps, Marine Barracks at 8th and I Streets in Washington, DC. As part of this unit, he served at the White House under two Presidents, and at ceremonial duties all over DC. The contrast from the jungle of Vietnam was startling. While fighting constant nightmares of combat, he stood before Presidents, politicians, celebrities and heads of state, all the while maintaining the dignity and poise required for his position. This book is honest, graphic, and yet enlightening, ending positively. For those interested in understanding the Marine Corps and the horror of personal, ground combat, contrasted with the bright lights and facades of Washington politics, this book will not disappoint.

Reading Rick’s chapters on “The Barracks,” (8th & I), rekindled many fond—and not so fond—memories of our time together. I was a fresh-caught second lieutenant charged with the almost impossible task of transforming combat Marines into ceremonial perfectionists. For a Marine to leave the mud and blood of Vietnam and report to the most fabled and oldest post of the Corps was something not every Marine could handle physically or emotionally. Rick’s reaction to the trauma and how he succeeded reminds me of the song Tin Man by America: “But Oz never did give nothing to the Tin Man that he didn’t, didn’t already have.” I believe no one gave Rick anything he didn’t already have. He survived that transition with little help from anyone because he is that kind of Marine. To become one of a nine-man section responsible for the Marine Corps’ official colors and all presentations throughout the nation’s capital is something only a few Marines can own. For those fortunate enough to have watched a Friday Night Parade, Rick’s vivid description makes that “MGM Production” come to life. No Marine leaves “The Barracks” untouched by the significance of it all—Richard W. Foster, Jr. is living proof of that!
—Colonel Jim Bathurst , US Marine Corps (Ret)

Richard W. Foster Jr. (“Rick”) withdrew from high school in his junior year at 17 years old to join the Marine Corps. He served in Vietnam as a rifleman during the heaviest fighting of the war. Upon his return from combat, he was selected to serve in the most prestigious ceremonial Marine unit in Washington, DC. His extensive combat and subsequent DC service shaped his life dramatically.

He entered college after his Marine duty, earning a bachelor’s degree in Political Science/English and a subsequent law degree. He practiced law while living on a working ranch near Junction, Texas where he raised two children: a son who is an attorney, and a daughter who is an airline pilot. He has remained married to his first and only wife since 1969.He presently lives in Newnan, Georgia near his two children.