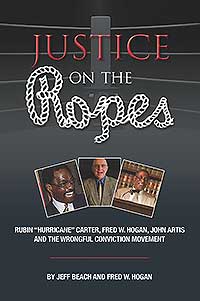 Rubin Carter and John Artis Had Been Knocked Down...

But what prosecutors who built a highly questionable case against the famous middleweight boxer and his teenage acquaintance in the 1966 Lafayette Bar and Grille triple murders in Paterson, New Jersey, did not count on was a young investigator from the New Jersey Ofﬁce of the Public Defender who was willing to devote his free time, talent and energies to picking apart the case built on “eyewitnesses” who likely saw nothing they had claimed to see and racial prejudice against two African-American defendants. As Fred W. Hogan tracked down the “eyewitnesses” and got them to admit their statements to police were lies, the world began to pay attention to the case, with Bob Dylan writing a famous song about “The Hurricane” and boxing luminaries like Muhammad Ali, “Sugar Ray” Robinson and others holding fund-raisers and speaking out against the injustice done to Carter and Artis. Ultimately, they would be freed, and Carter, Artis and Hogan would make exposing other wrongful convictions a life’s work and passion.

“Rubin Carter once told me, ‘Without Hogan, I would have died in prison.’ Fred Hogan was indeed instrumental in helping Rubin and John Artis win their freedom, and now he and Jeff Beach have added to our understanding of one of our country’s most fascinating stories of race, crime, and redemption. Justice on the Ropes offers unique insights that only someone who lived through the experience – with Rubin and John – could provide. Just as he did many decades ago, Fred Hogan continues to speak the truth.”
– James S. Hirsch, author of the best-seller Hurricane: The Miraculous Journey of Rubin Carter

“A compelling saga of Fred Hogan’s battle to free two innocent men—Rubin ‘Hurricane’ Carter and John Artis – in a landmark murder case and his efforts to overhaul America’s flawed criminal-justice system.”
– Selwyn Raab, author of the best-seller Five Families: The Rise, Decline, and Resurgence of America’s Most Powerful Mafia Empires

“Do you care about justice? Do you care about exoneration of the falsely accused? If you do, this book, about the fight for freedom and dignity, is a must-read. The notion that justice is blind has been a guiding principle in our nation. However, this concept is not always true. In this book, it is amply demonstrated that Investigator Fred Hogan has two good eyes, a strong heart and the vision to see to it that occasionally justice needs the will and determination of a dogged hero to expose the truth.”
– Michael Murphy, former Morris County, New Jersey, Prosecutor

A human triumph! “Justice on the Ropes” tells how a dedicated Public Defender’s Office investigator, working on his own time, paved the way for freeing the wrongfully convicted Rubin Carter and John Artis.
– Dave Anderson, Pulitzer Prize-winning New York Times writer for sports commentary and inductee into the National Sportscasters and Sportswriters Hall of Fame.

Jeff Beach spent 15 years in print journalism, where he was honored with seven statewide and regional journalism awards, before becoming the public information officer for the NJOPD in 1999, where he met and became colleagues and friends with Fred Hogan. Since 2004, he has been a public information officer, policy advisor and emergency management coordinator for the New Jersey Department of Agriculture. He served in 2012 as the national President for the Communications Officers of State Departments of Agriculture (COSDA). He is the father of two daughters and is active in efforts to reverse public bias against pit bulls.

Fred W. Hogan, a former policeman who switched careers early to be-come an investigator for the New Jersey Office of the Public Defender (NJOPD), put his investigative skills to work paving the way for the exoneration of wrongfully convicted boxer Rubin “Hurricane” Carter and his co-defendant John Artis in the 1966 triple murder at the Lafayette Bar and Grille in Paterson, N.J. The U.S. Army veteran retired after 40 years with the NJOPD, having filled roles as both an investigator and Statewide Drug Court Coordinator. He now lives in Lakewood, N.J. and serves as the President of the Council on Compulsive Gambling of New Jersey and is a past president of the substance-abuse counseling group New Jersey Lawyers Concerned for Lawyers. He has two sons and seven grandchildren, and devotes much of his time to addiction-counseling efforts and promoting military veterans’ issues.