A Swing Down Memory Lane 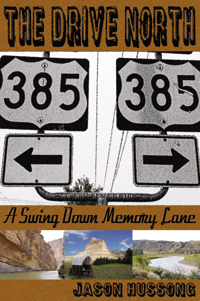 A Swing Down Memory Lane

One Man. One Car. And Endless Miles of Open Road, All Leading to America’s Greatest Treasures.

Jason Hussong has traveled to all seven continents. But nothing in his globetrotting past can prepare him for the expedition he’s about to take when he hops in his car to visit America’s national parks in a remarkable solo road trip. The Drive North chronicles Hussong’s journey as he travels the country from Mexico to Canada, visiting what Wallace Stegner called “America’s best idea”—from Carlsbad Caverns in New Mexico to Canyonlands in Utah, Theodore Roosevelt National Park in North Dakota to Grand Canyon in Arizona. And that’s just for starters. Along the way, Hussong paints a vivid and often hilarious portrait of the people and towns that dot the map. Here are the roadside diners, chain-hotel clerks, small-town hookers, cell phone dead zones and tourist-trap museums that make road trips so great—including an alien-themed S&M clothing store in Roswell, New Mexico. The endless landscape outside his windshield is at once bizarre, unexpected—and, most of all, beautiful. Through it all, Hussong relives the family road trips from his childhood in the Beast—the hideous conversion van people-hauler—that kick-started his love of travel. What emerges is a searching, moving memoir of family, place, and growing up.